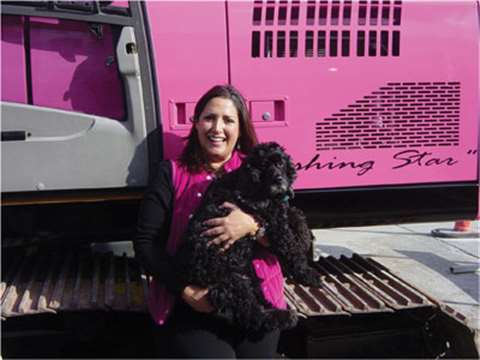 Simone Bruni, Demo Diva of New Orleans, is one of the more ‘colourful’ individuals to join the US demolition industry

She took up the story: "When the storm hit, the convention centre was destroyed and the tourism industry really just shut down for 18 months. Our boss had laid us all off, my house had been flooded 6 ft deep during the storm and everything that my parents owned, their whole retirement plan, was also flooded."

She went on: "I looked around the city but it really was a topsy-turvy time. I could have left New Orleans and started afresh somewhere new as I had nothing to tie me down or I could be part of something larger than myself - I could work for a purpose. I could see the emotion of the city - I was part of that emotion myself. So you ask, why demolition? It was the first question on every person's mind. Demolition is such an important step for our city and our lives. Whether it be a home, or a business, or a community centre or a playground, demolition was and is the first step to the future. I decided I wanted to be a part of that. I wanted to have an influence over my city."

"There were a lot of people coming in from outside the city - some where there to help but some were carpet-baggers. I was enraged by the price gouging so I therefore decided to sell trust to my neighbours. I might not be able to tell you the name of that heavy machine that will come, but it will come, it will have all the proper insurance and licences. I learned the process as I went."

Part of this learning process was just in talking to a lot of the people already involved in the clean up and demolition that was ongoing. Simone continued: "I talked to a lot of men, it was only men doing the work, and I think that perhaps because I was a woman, they were a bit more willing to share information with me. They wanted to be helpful because they did not see me as a threat. Smile and listen and you get all their secrets!"

For the first three years, Simone acted as a broker, acting as the link between her customers and other demolition contractors working in the city, subbing out all her contracts to contractors who were 100% employed by the Demo Diva. At this time, Simone did not own any of her own equipment. "The thing that catapulted me into actually becoming a contractor in my own right was when I realised the power I had in the Demo Diva name. When I started, there were a lot of other companies out there with funny names - we were all nailing signs onto telephone poles. There were thousands of them and you had to have the catchiest name to stick out. Within six months, the city came down hard to enforce ordinances to stop this practice."

The Demo Diva name stuck however, targeting women since Simone felt that, especially initially, male customers would not trust her because of her lack of experience and basic knowledge - she was really selling emotion and trust.

As time went by and she became more involved with the community, and in her own words: "fell in love with demolition", she realised that she wanted more control over the work being done under her name. She then began to investigate what would be required to start up. Simone continued: "I asked the men in the field for advice on the kind of equipment I should buy, including even two of my direct competitors, who happened to be using Volvo machines and who recommended this manufacturer's equipment to me for a variety of reasons."

The most eye-catching component of the Demo Diva offering is of course the livery of the Volvo excavators that have been supplied - best described as shocking pink. Simone said of this colour choice: "Along with the name, I had to set myself apart with my branding and after all, I was targeting women as my initial customer base. There are a number of seasoned contractors in the city with years of experience behind them - why would a party planner have a seat at the table? Everything being pink was part of a statement that there is a woman who has chosen a non-traditional route."

It has to be said that Volvo was not overly enthusiastic about the colour. "Volvo was not happy about it", said Simone. "Because I had financed my first machine through their finance division, they tried to talk me out of it twice. They pointed out resale values and the need for a repaint when the machine went back. I just said too bad, do it, and in the end they went along with it."

At the end of 2010, Simone took delivery of her third pink Volvo excavator. The colour of her machine is a statement that catches people's eye and has perhaps turned into something even more potent. "It's turned into more than just strong branding; it has turned into a form of empowerment. I know have women backing me, saying go girl and that kind of thing, from all industries and from all over the world. It is the power of the colour that has done that," said Simone.

So what of the future? While currently a modest outfit with just three excavators, the enthusiasm with which Simone has embraced the industry has not abated and she is looking at steps to develop the Demo Diva even further. "I am looking to break into new markets, to say women are rocking the world, women are moving earth - no pun intended," she said with a laugh. "What has happened in New Orleans is that urban blight has become an issue. Not only am I still cleaning up storm damage five years after Katrina, we have just launched a PR campaign called 'fight the blight'. People have abandoned their properties - have just walked away and there is grass literally growing over rooftops. Working with an IT company, we are developing a very sophisticated planning tool to identify neighbourhoods affected by urban blight and using that to help drive our marketing effort."

"I foresee that the US will see a major urban blight situation over the next five to 10 years in its major cities and one of my goals is to see more and more pink Demo Diva machines appearing across the country working to help alleviate this." Alive to these possibilities, Simone has traded-marked the name/colour combination to allow her to brand apparel, tools and for franchising purposes.

If Simone's enthusiasm, passion and drive are anything to go by, D&Ri suspects it will not be very long before other US cities experience the Demo Diva treatment.