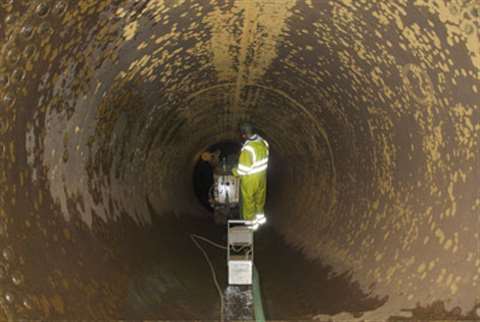 The 12 MW Glenlee hydroelectric power station is one of six such facilities that make up the 106.5 MW Galloway Hydro-Electric power scheme in the south west of Scotland. Built in the mid 1930s, this is comprised of a 60 km network of lochs, dams, tunnels, aqueducts, pipelines and rivers that connects the six power stations in a cascade system that reuses the water several times for power generation.

At Glenlee, water is gathered in Loch Clatteringshaws and then flows through a 6 km (3.7 mile) tunnel to a portal control valve above the power station. From here, it plunges down 125 m (410 ft) through a 570 m (1,870 ft) steel penstock to the station's 6 MW turbines.

The penstock required cleaning and repainting - this had not been carried out since it was installed in the 1930s, and Scottish Power Generation Ltd brought in Falkirk-based specialist contractor Concrete Repairs Ltd to do the work. CRL believed that high pressure water jetting could be applied to the job, and in turn recruited Perthshire-based N.E.T. Waterjet Ltd to carry this out.

N.E.T. purchased a Conjet 324 Robot and fitted it with the optional Hammelmann rotor head instead of the standard hydrodemolition lance. The flange-bolted expansion joints and butterfly valves in the penstock were removed to provide the robot access at several points. The machine has been working a single shift, seven days a week, and has averaged a cleaned area of 200 m2 (2,150 ft2) per shift, with a best area of 320 m2 (3,440 ft2) in a single shift. CRL follows along behind the robot to give the cleaned pipe a two-coat glass flake epoxy coating from a purpose built gantry that travels down the inside of the pipe.

Waste water and debris is collected by CRL in a sump in the turbine house of the power station, from where it is then pumped into tankers for off-site environmental treatment and disposal.