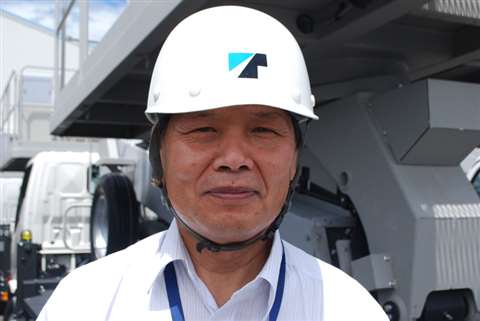 The company has a 40% share of the Japanese domestic truck-mounted AWP sector, he says: Aichi, located in another part of the country, is the market leader, which enjoys a 60% chunk of this Japanese manufacturing sector.

Tadano’s domestic sales are split thus: 60% of its units are destined for the rental sector; 15% go to telecommunications companies; 15% to electrical power cable firms, and the remaining 10% are destined for “others”, or, as Mr Kimura puts it, “small businesses”. The rental units are, in turn, hired by construction and signage companies.

Japan’s geographical features make for a steady demand for AWPs. Some 80% of the country is mountainous, with the big conurbations clinging to the coastal plains. A network of road and rail tunnels connects the towns and cities – and aerial work platforms are commonly assigned to their maintenance.

In 2012, 3300 AWPs were sold in Japan; in 2013, that figure was 3800. Tadano expects demand to stay at 2013 levels in 2014. Foreign firms do import some AWPs into Japan, but in small numbers, and small units, around the 4m category, a market in which Tadano does not operate, “We do not want to compete in this market, it is not profitable for us,” asserts Mr Kimura.

The sales increase between 2012 and 2013, he said, was due to ongoing work following the Great East Japan Earthquake, of 2011, and “Abenomics” – the policy of the current prime minister to kick-start the Japanese economy. Tadano’s aerial work platforms range from 8m to 40m. All told, there are 20 truck mounted models, chiefly mounted on Isuzus and Hinos. In addition, the company makes two self-propelled units.

The electric and telecommunications range comprises five models, from the 8m AT-80TT, to the 14.1m AT-147CE. All are equipped with plastic buckets; the top of the booms are also made from plastic.

Looking at a large poster, which highlights the range, one can see how Tadano developed its AWPs, to meet the demands of the marketplace. As well as the specialist electric and telecommunications models, the poster shows general purpose, articulating units, and “Super Deck” models like the AT-200S. Additionally, there are crane augers and bridge inspection vehicles.

All these machines are the result of years of research, development, and real, working life experience – and they have given Tadano the 40% share of the Japanese market. But the firm wants a greater slice of the share. Mr Kimura says, “Of course, we would like to expand our share in Japan. We already have a good result in the rental area, but we are weak in telecommunications, so we need to strengthen this area.”

He stresses that winning a greater market share requires further investment in quality and safety, as well as simply increasing production. Globally, Tadano ranks tenth in the aerial work platform business. As other countries have developed their manufacturing bases, and with a strong yen, Japan does not benefit from exports in the way that it did. That said, it is still the world’s third economy. With 127 million people crammed into an island with an area roughly the size of California, and large urban areas, demand is strong for aerial work platforms – roads, bridges, telecommunications, and rail infrastructure all need constant maintenance. Infamously, too, Japan is prone to extreme natural phenomenon, such as typhoons, tsunamis, and earthquakes. These are regular occurrences, and AWPs are needed to handle their aftermaths.

In the West, buildings last centuries, but in Japan, they are seen as temporary structures, and are built, and demolished, in just a few decades. As the author of this story can testify, one can return to a supermarket, or a petrol station, just days after it was given your custom, only to see the entire structure razed to the ground. New buildings – usually prefab – are rapidly erected in their places. Aerial work platforms, then, are mobilized continuously.

The Tokyo Olympics, scheduled for 2020, will also mean a construction explosion, and, with it, extra demand for AWPs, Mr Kimura explains. “We also have a chance to expand (our aerial work platform business), with the replacement of the social infrastructure, like highways, bridges, and tunnels in the Tokyo area.”

The government has allocated 30 trillion yen to the improvement of Japan’s expressways, or motorways. Such an investment has a knock-on effect on demand for aerial work platforms. Tadano AWPs are also used today, to maintain the famed Shinkansen, or bullet train, routes, which depend on a series of tunnels and bridges, said Kimura.

Unlike many Japanese manufacturers, which have become household names by selling their wares internationally, Tadano has chosen to concentrate on its domestic market. But is the company looking to export to expanding China, its neighbour just to the west? “We only export self-propelled types to China, not truck-mounted aerial work platforms,” he states.

Tadano’s limited exports are targeted at very specific, almost niche, markets. For example, it supplies self-propelled units to South Korean shipbuilders. On the day we visited, a truck-mounted bridge checker was undergoing inspection before being shipped to the Thai government.

Out of the office, into the Japanese heat – and then into the aerial work platform plant. Yukihara Tsuda, assistant projects manager, general affairs group, and Takuji Murakami, general manager, marketing department, explained that, here in the Tadano aerial work platform manufacturing plant, some 10 million yen of parts are stored, for both the AWPs and the crane production, the latter which is performed at a different site.

The aerial work platform plant covers a total of 70,000m2, and it produces 120 AWPs a month. During production time, there are 150 line workers on site, states Mr Tsuda. We saw stacked steel sheets, strategically positioned, before being fashioned into booms.

After the booms are made, they are then painted, by machine. These are, of course, Japanese products. But, when you look at smaller components and machines, famous Japanese names are also in abundance, made by manufacturers like Hitachi, Kawasaki, and Honda. Plastic caps, explained Mr Tsuda, protect delicate hydraulic pipes from contamination, before assembly. The scene appeared as one characterized by Japanese order and precision. Personnel working quietly, and methodically, in a production process that appeared seamless. Gantry cranes safely handled parts; vending machines offered a range of ice-cold drinks.

Outside, we were shown the inspection area, where platforms are checked before they leave the premises. There was an electrical power cable checker, with its distinctive plastic bucket; the bridge checker, destined for Thailand, and a hybrid truck-mounted aerial work platform which can be switched, in an instant, from road to rail duties.

With its 40% share of the domestic Japanese market, Tadano knows where its truck-mounted AWP business lays. Mr Murakami stated that Tadano has no current plans to build new models, or to export units in significant numbers. That policy is subject to change, though, as markets develop. “But not now, or in the near future,” he says.