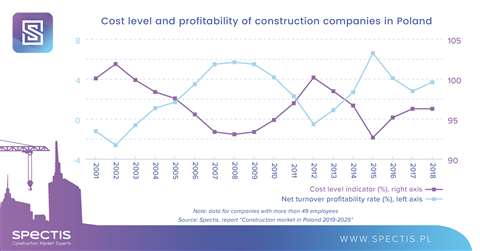 Polish construction companies are said to have successfully confronted looming insolvency issues in 2018, but that this did not mean that the risks had been mitigated entirely.

Construction industry research specialist Spectis said that loss-making contracts whose prices were set at the time of increased competition would still be pursued and billed in 2019 and 2020. It forecast, however, that fewer of them would be active, and that backlogs would start mostly to consist of contracts that were valued more conservatively.

Medium-sized construction firms and large construction companies generated a total net profit of PLN4.3 billion (€1 billion) in 2018, compared to PLN2.9 billion (€700 million) in the preceding year, according to the latest Spectis report – Construction Market in Poland 2019 to 2025.

Nearly half of the profit – PLN2.03 billion – was contributed by companies specialised in building construction projects, which are among the chief beneficiaries of an upturn in the residential construction segment that has lasted for the past few years.

While the general contracting sector was severely hit by soaring prices for building materials and increased labour costs in 2018, Spectis said the sector benefited from the fact that these rising costs were accompanied by a substantial revenue hike, coming on the back of a significant number of orders.

As a result, companies were to some extent able to reduce the cost-to-revenue ratio to just under 96%, which resulted in improvement of net sales margin to 3.7%.

Bartlomiej Sosna, construction market expert at Spectis, said that in most cases, general contractors had learnt the lesson from the investment boom on the eve of the Euro 2012 football competition.

“A vast majority of contractors take into account current market realities in their bidding policies, which has resulted in a major hike in bid prices in tenders,” he said.

“It is also increasingly the case that companies adopt a selective approach to contract bidding and, quite often, they decide not to sign a contract despite winning the tender.”

He added that delayed tender procedures often caused bidders to withdraw their bids. As a result, it was more and more often the case that contracts were awarded to lower-ranking contractors with higher-priced bids.

Pushing bid prices, on the back of declining competition within the sector, was believed to create an opportunity for construction companies to avoid the scenario seen in 2012 to 2013 and to restore contract margins.

“The growth of bid prices recently observed is capable of offsetting increased costs of construction companies” said Sosna. “Moreover, in some cases high-priced contracts of today can generate above-average margins in two or three years’ time, provided that building material prices finally decrease after upward price movements, just as was the case in 2015.”

Spectis felt that investors and contractor companies operating in the commercial construction segment would find it relatively easier to cope with current problems related to maintaining profitability in construction contracts, as in this sector the parties usually sought to reach agreement for the project’s sake.

The situation in public investment projects was said to be completely different, though signs of modest improvement had become apparent in recent weeks, said Spectis, citing efforts made by rail operator PKP PLK, GDDKiA (the General Directorate for National Roads & Motorways) and the major power groups.