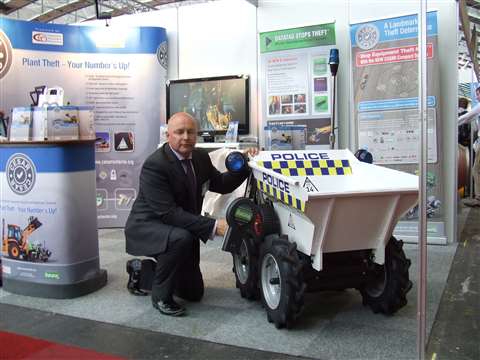 Chris Harrison, national sales manager at Datatag, demonstrates how to scan for a tag

Developer of anti-theft and machine identification technology, Datatag, is growing its business throughout Europe after successes in the UK.

Chris Harrison, national sales manager at Datatag, told IRN during the International Rental Exhibition (IRE) in Amsterdam that the company had received strong support from equipment manufacturers, insurers and authorities after the success of the Construction Equipment Security Registration Scheme (CESAR) in the UK.

"€ 4.5 billion worth of construction equipment is stolen across Europe each year," Mr Harrison said. "Organised criminals are targeting this sector, but we have found that they now are avoiding machines that carry Datatag's tamper-resistant number plates and tags. Indeed, UK authorities have had a 100% success rate when using Datatag's evidence in court."

"The company has received support from the Ministry of Justice in the Netherlands together with authorities and manufactures in Belgium, Italy, France and Germany," Mr Harrison said.

"Getting government support in each country is difficult as some governments can make decisions much faster than others, but we have made significant progress with manufacturers, insurers and authorities throughout Europe.

Datatag's anti-theft and identification system involves both visible and hidden technology. On the outside of a machine, the company fixes unique, tamper-proof plates with identification numbers which ensure that the equipment can be identified and tracked.

In addition, a glass tag the size of a grain of rice can be installed inside the machine containing a unique code that can be scanned, while microdot identification can be applied to any surface on the machine, making it virtually impossible for criminals to locate and remove them all.