Power and growth: a heavy lift tower crane at work 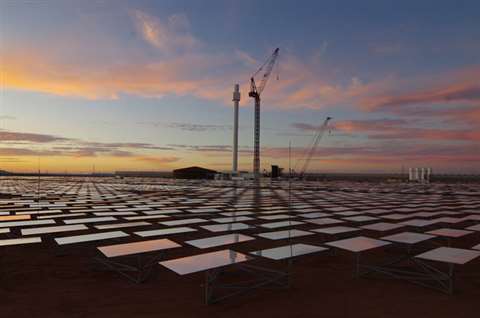 A high capacity tower crane was chosen as the best solution for an unusual construction project in Australia that would ordinarily be done using a large crawler crane. Simon Marr, Marr Contracting managing director, explained the Sundrop Farms project to Alex Dahm.

One of The Men from Marr’s, Simon Marr, managing director at Marr Contracting in Australia, took time out from his busy schedule to explain his unusual crane solution for an interesting agricultural development project.

At the beginning of 2014 Australian engineering contractor John Holland contacted Marr Contracting about the crane work for the Sundrop Farms Port Augusta Expansion Project. Put simply it is a vast greenhouse for growing fruit and vegetables in a sustainable fashion. It is in South Australia at Port Augusta and has the capacity to grow 15 million kilogrammes of fruit and vegetables a year.

To feed the greenhouses with water a desalination plant was needed. Seawater is pumped out of the Great Australian Bight, an open bay, at Port Augusta. Electricity is needed to do this and to run the thermal desalination plant and the rest of the farm. A solar power station was chosen, consisting of an array of mirrors on the ground arranged around the base of a tower with a steam drum at the top. The mirrors reflect sunlight onto the drum where the heat turns water to steam for turbines to turn generators.

Simon Marr takes up the story from the initial contact with John Holland. “They wanted us to have a look at some craneage solutions they were developing. By the end of 2014 we had priced the project for them and developed a basic scheme. Then, by the end of 2015, we were awarded the contract to develop the scheme completely and we erected the crane down at Port Augusta.”

In the beginning Marr looked at the overall height of the structure and what the lifts were from the design drawings. John Holland supplied a list of the component weights from the supplier and the final height of the structure. “We gave them back a couple of options for the craneage. One was using a [Favelle Favco] M1280D and one was using an M2480D, both freestanding.”

With the M2480D option doing the same lift it would have been possible to put more than 300 tonnes up there, Marr said.

Before choosing the tower crane option, Marr explained, “John Holland talked about bringing in a CC 6800 [1,250 tonne capacity Demag lattice boom crawler crane] with superlift, a really big machine, but there was no room down the bottom to assemble it and do the work so this was the perfect solution for this job.”

Primary reasons for choosing the tower crane over other types as the best machine for these lifts include superior lifting speed, an ability to make a wide range of lifts from pre assembly works, general lifting to final installation. In addition, set up time was shorter, cost was lower and the area required to set up the tower crane was minimal, as opposed to the opposite for a crawler crane.

“The overall height of the structure was 116 metres and the heaviest lift we had to perform was just over 100 tonnes. We couldn’t attach or tie-in the crane to the structure at all so we had to free stand to the full height.

“We ended up putting the M1280D on 77 m of tower and then a 64 m boom. Underhook height was 141 m. Tip height was about 146 m. In addition to detailed drawings showing clearances for the project we did something else. We knew that the height was critical, the crane standing was critical and the load itself was critical, in relation to how it had to interact with the boom of the crane. So we built the final design into a 3D model and we used that to fly down through it and check all our clearances and we used it for checking our methodology of how we were going to install the crane. Also, we showed it to the riggers who were going to erect the crane so we could point out all the pinch points and potential clash points.

“It is a very handy tool and even covers the access system so that you can see the critical points. We needed to get an access system through the tower transition and on here we could model it up and check it and virtually stand inside it. Down at the base too we modelled it so you can see how it all interacted with access points through it and so on.”

An issue with the final lift, to put the steam drum on top of the tower, was the clearance and the fact that the top section wasn’t round - it had a protrusion on it so Marr needed to check and see the position of the crane and how it was orientated with the clearance - how that all worked.

This final lift was the major highlight of the project. “One of the things was that we developed a system with tag lines coming back to winches to hold the orientation of the load as it went up and it paid out the winches so the load didn’t spin, especially as it was more than a hundred metres up in the air.” The tag line system was developed by the John Holland site team and Marr’s onsite rigging team and crane operator.

Marr was transporting the crane halfway across Australia from Sydney to South Australia so it gave the client two options: “We could either transport ballast there for the static base or, because you need to put pads in there anyway to get your bearing right on the ground, we could design the bearing pads to act as bearing pads and also as counterweight for the crane.

“We poured four pads four by four metres. Then we anchored the crane with bolts cast in to the concrete then put the base on top of those. They acted as bearing pads for the loads and also as ballast to stop the uplift so we killed two birds with one stone. It saved the client the cost of transporting the ballast which was quite expensive because you would have needed around 250 tonnes of ballast on that crane. It was a really good solution,” Marr explains.

“We put the boom in in two pieces, the first half of the boom without the tip in it, hung off the erection pendants.” A 280 tonne capacity Liebherr LR 1280 lattice boom crawler crane was down there on site and was used to erect the whole M1280D to full height of 110 m (mast height). Capacity of the erection crane meant that the boom had to be lifted in two pieces. “No component weighs more than 17 tonnes. That’s one of the beauties of these cranes, you can break them down into small pieces. The whole boom in one piece is 25 tonnes. We did it in two.

“The other thing that we did here that we use a lot now in our fleet is to use our own lightweight pendant system. Rather than the guys going up there and struggling with big heavy steel pendants they just put our system together. We made the joint in the boom at the same place as where our lightweight pendant joint was and we put a platform there in the boom so the guys could just go up there and splice it.”

Work stared in November 2015 when Marr mobilised to site and they were finished early in February 2016. It was clear on this project that all the careful planning paid off, Marr says, “It went perfectly and everyone was very happy with it.”