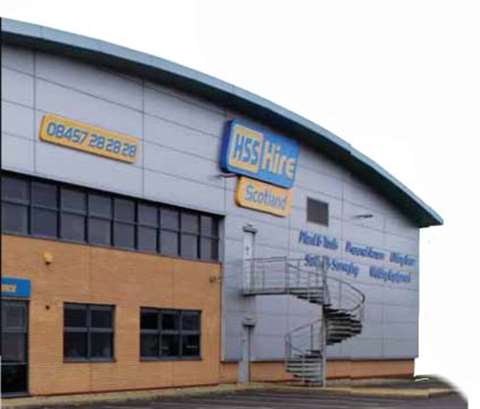 This massive new depot in Edinburgh is one of a growing number of HSS ‘Premier Centres’ in the UK.

Rental companies used to joke they would wait for the publication of HSS Hire's latest catalogue before making their annual fleet purchases, such was the UK tool hirer's reputation for breaking new and innovative rental products.

The current management at HSS probably wouldn't take that as a compliment. As Chris Davies, its chief executive, recently said; “We have to be driven by what the customers wants, not by products, which is perhaps how the hire industry has done it in the past”.

This ‘hard-nosed’ approach to products is just one element in a big turnaround at the company since it was acquired by an incoming management team and private equity company 3i just over three years ago. It was that deal that led to the departure from HSS of industry-stalwart Lister Fielding and the appointment of Paul Nolan as chief executive.

Mr Nolan started the changes with a re-focus on trade and professional customers, and the transformation is continuing now under Mr Davies, who replaced Mr Nolan last September and whose background is in retail sales with Disney Stores Europe and Staples Office Superstores.

And it is certainly a transformation: seemingly gone is the ambition to be a global rental ‘brand’ with owned or franchised outlets all over the world-including a big presence in the US-and on the way out is the +400 depot presence in the UK, which included many high street locations. These town depots made HSS the closest thing the hire industry had to a household name.

The loss-making US and German rental businesses were sold, and the focus on extending the international franchising network has now taken a back seat. “Our focus is on the UK... We are not proactively looking at franchise partners”, Mr Davies told IRN, “We get approaches, and we take a pragmatic view.” That pragmatism has led HSS to take a 25% share in its Spanish franchise holder, Rentecnika, and also to make two acquisitions in Southern Ireland, including Laois Hire Services.

If HSS in the past was guilty of trying to be all things to all customers, the new HSS has a strategy that focuses on what it calls the ‘build, maintain and operate’ business in industrial sectors such as utilities, industrial users, facilities management and building and construction.

In fact, pure building and construction customers represent something less than 20% of the company's total business, while the domestic/DIY sector-one in which HSS had a particular strength through its high street stores-now represents around 10% of sales.

Mr Davies says these consumer sales remain important; “and we have a very strong foothold in that”, but there is no mistaking that professional end users are the target.

This focus is reflected not just in a less diverse product range-the number of product lines has fallen from 2300 to 1800-but in a rebalancing of the UK network away from a large number of small stores to a smaller network and a growing number of what it calls Premier Centres, massive one-stop shops-typically 30000 ft2 (3000 m2)- often with long opening hours that are being built in the major urban centers of the UK, most recently in Edinburgh.

Phil Wolff, HSS operations director-and the only one of eight board directors who predates the 3i/management buy-in, having joined HSS in 1984-tells IRN that there are now around 50 Premier Centres nationwide, with nine alone within the confines of London's M25 orbital motorway. He says he can see a potential for as many as 70 nationwide.

This shift in the strategy for the network has seen the number of locations in the UK fall from over 360 in early 2006 to closer to 300 now.

Mr Davies says the focus now is on “building long term relationships with key customers-becoming their logistical partners.” One example of this is providing the specialist equipment and tools used by Otis whenever it installs a new building elevator. Similar agreements are in place with Network Rail and Tubelines, one of the contractors working on the London Underground network.

Targeting this kind of customer makes sense, he says; “The great thing is that they all carry a service premium.” It also means, he says, that new equipment is a must, as is “exemplary service”. One example of this is the use of ‘in-plants’, HSS staff working full-time within a customer's organisation making sure that critical equipment is delivered where it is needed and on time. There are currently seven or eight such staff working in the UK.

The company thinks the UK hire market will continue to grow by around 5% a year, and the major projects associated with London's hosting of the Olympic Games will also provide a welcome boost.

HSS's new-found focus will continue, and the lure of clever products will be resisted. Its catalogue is still well worth a look, but don't expect anything too adventurous, unless a very big customer has asked for it.