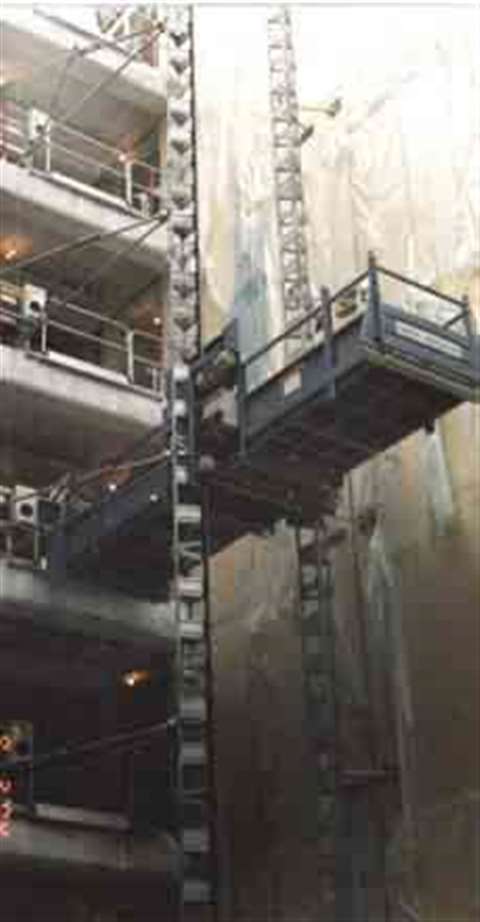 Contractor Skanska is renting two Geda 1500 Z/ZP transport platforms from Norwegian rental company E D Knutsen Maskin, based in Fetsund, for use on the construction of a new €100 million hospital in T

There is a general trend throughout europe for rental companies to improve the level of service they offer the construction sector. As a contractor you may not have experienced this directly-and you may even question whether there is such a thing as a ‘rental sector’in your territory-but there is little doubt about the intentions of renters.

The form this takes varies widely from country to country. In the UK, for example, many of the larger rental companies are focusing on making it easier for large contractors-the national accounts-to do business with them. This means offering customers a nationwide service, a very wide selection of equipment, and a simple means of communication, whether via a single phone number or a secure dedicated internet link to the rental web site.

Contractor Skanska is renting two Geda 1500 Z/ZP transport platforms from Norwegian rental company E D Knutsen Maskin, based in Fetsund, for use on the construction of a new €100 million hospital in Tønsberg. The platform's 6 m length is sufficient to accommodate building materials as well as 6 m long heating and air conditioning tubes, and the hoist is erected to a height of 24 m. The two units will be rented to Skanska for 12 months.

What is surprising here is that even some market leaders, such as Finning-owned Hewden Stuart, have been a bit slow to respond to the needs of its larger customers. Hewden recently announced a restructuring of its business in the UK that, among other things, will entail a ‘collapsing’of its six specialist subsidiary companies into a single company with a divisional structure.

Nick Lloyd, Hewden managing director, told CE's sister magazine European Rental News that one element of the reorganisation will be to service its national accounts more efficiently, with a single contact number to be established covering the entire Hewden product range. Clients currently have to make separate calls if they want, for example, both cranes and earthmoving equipment rental. “We have to recognise that national accounts require a way of being dealt with, and we need to revise how we organise ourselves”, said Mr Lloyd.

In addition, the company is moving towards a ‘hub and spoke’structure, with major hub depots servicing smaller rental branches. Mr Lloyd saidthat these hubs will be able to “represent” the entire range, even if not all equipment is stocked at these locations.

This kind of national account organisation requires, of course, a true national coverage, and it is the case that this is still something of a rarity in many other European countries, particularly in southern and eastern Europe.

Spain is a good example, with very few rental companies able to call themselves national operators. Some, however, now see the benefits of size. General de Alquiler de Maquinaria (GAM), created just over two years ago, is now Spain's biggest equipment rental company. “The Spanish rental market is constantly changing, maturing, with new supranational competitors”, says the company's chief executive, Pedro Fernandez, “It is becoming a more professional environment, where size is beginning to be an important asset. It is still too price sensitive, but it has a great growth potential.”

Mr Fernandez said that size for its own sake is not the ultimate aim; “For us the size is only an instrument. Our aim is to be efficient at adding value for our clients, workers and shareholders.

But we think that the bigger we are the better we will be able to accomplish our goals.”

The company already has 30 depots (29 in Spain and one in Portugal) and is also expending its equipment portfolio, which currently offers everything from mobile compressors to a 700 tonne crane.

One feature of GAM's strategy is to focus its activities into divisions based on customer type rather than equipment. Instead of the specialist crane, aerial platform, power and general plant divisions favoured by other big renters in Europe, GAM will “be oriented to our clients by business area (construction, industrial, events…)”, said Mr Fernandez.

“That means if I have a client who is building a motorway, I will classify this client under our construction division, independent of which type of product he rents. So in our depots we try to have every kind of machinery,” he added.

In Italy, meanwhile, the dealers of the major manufacturers are engaged in the dual process of trying to promote the concept of rental to their customers, and at the same time increasing the quality of the rental service they provide.

Komatsu and Caterpillar are two companies at the forefront of these efforts. Komatsu started using the NolOK brand for its dealer rental operations several years ago, but has now taken this one step further by creating a new ‘consortium’company, called NolOK.

In the past NolOK was simply used as a rental brand for Komatsu and its dealers, with each company free to use its own name, pricing and rental techniques. The aim of the new consortium is for all members to offer consistent pricing and service levels under the one name.

Piercarlo Boselli, managing director of Komatsu dealer CMI and the newly appointed president of NolOK, told CE; “It means that we will work in a better way; sell rental in a better way. All the dealers will learn more and the service offered will be higher.” NolOK will operate independently, but will be sponsored by Komatsu Italia who will provide equipment financing and marketing support.

Antonio Conte, managing director of Komatsu Italia, said the NolOK name would become “a kind of certificate of quality for dealers working and intensity of work being done. In simple terms, this suggests that rental is the best option when you need a machine on site for less than 150 days a year, with average daily use of 4 hours, and when the machine is operating on a ‘critical or very produce high added costs).

In rental”. He said the members had already agreed a common price list, “but this is not mandatory. Market pricing is different in different areas, so it will take some time to harmonise.” Other dealers involved include MARA and Gruppo Effe, the new business formed by the merger of Bauma Edilservice and Noledil.

The eight dealers plus Komatsu Italia currently run a fleet of around 700 machines, although there are plans for this to grow by +10% over the next year, and if other Komatsu dealers join up then the fleet could grow even faster. The current fleet comprises Komatsu machines-including large machines-but the option of adding further non-Komatsu equipment (as Caterpillar's dealers do with the Cat Rental Stores) is also under consideration.

Meanwhile, CGT Noleggio, the heavy equipment rental arm of CGT, Caterpillar's dealer in North and Central Italy, celebrated reaching a fleet size of 1000 units in September. Guiseppe Stringi, CGT's rental division manager, says the fleet would grow by a further +10% next year. The company rents Cat equipment including large items, such as the D8 bulldozer, the 980 wheeled loader and 365 excavator, with small compact equipment and tools rented by a sister company within CGT called Noloitalia.

Mr Stringi said CGT has been promoting rental in Italy for several years; “We are trying to convince contractors to consider the availability of a rental fleet as a strategic resource during the project planning stage. Some are doing that, and it's important to say that CGT is working to provide that kind of resource.” CGT Noleggio is also offering its customers flexible rental packages, where, for example, the contractor can change equipment during a contract.

The company even hands out small ‘rental calculation’ cards, illustrating whether a client should rent or buy equipment based on the type and intensity of work being done. In simple terms, this suggests that rental is the best option when you need a machine on site for less than 150 days a year, with average daily use of 4 hours, and when the machine is operating on a ‘critical or very critical’job (defined as one where inefficiencies will produce high added costs).

Sales Of Construction Equipment Have Been Declining In Italy In Recent Years, Which Is One Reason That Contractors Are Looking To Rental To Supplement Their Equipment Needs. When You Are Not Sure About The Market, Renting Suddenly Becomes A More Attractive Option.

This Is Certainly What Rental Companies In Portugal Are Hoping As The Construction Industry Tries To Weather An Extremely Difficult Period. Last Year Construction Activity Shrunk By +12%-Making It Europe's Worst Performer-And This Year A Further -5% Fall Is Likely. In This Environment, Rental Companies Have Been Shedding Fleets, Competing Aggressively On Price, And Hoping That The Depressed Market Will Push Contractors To Rent More And Buy Less.

“In Portugal, Contractors Like To Own Machines”, Said Jorge Patricio, Managing Director Of Volrent, The Rental Subsidiary Of Auto Sueco, Volvo's Dealer In Portugal.

“Now We Have A Big Economic Crisis, And Contractors Are Looking At The Fleet That They Have-At The Leasing Costs That Appear Every Month. So We See An Opportunity For Rental,” He Said.

Mr Patricio Describes The Portuguese Rental Market As Immature, And Part Of The Volrent Project Is To Grow The Acceptance Of Rental In The Country And To Expand The Offering. He Says That Two Additional Depots Will Be Opened Over The Next Few Months-One Each In Central And Southern Portugal-To Add To Those In Lisbon And Porto. The Company Focuses On Compact Equipment-Backhoes, Compact Excavators, Compact Wheeled Loaders As Well As Some Skid Steers And Telehandlers And A Few Compressors.

Mr Patricio Said It Will Not Benefit Volrent To Enter Into A Rental Price War; “Of Course We Have The Same Customers, But We Cannot Enter Into Price Wars Because We Need Money To Reinvest In The Fleet.” Instead, He Says They Will Focus On Providing A Good Level Of Service With Modern Equipment, A Strategy Backed Up By Employing One Mechanic For Every 30 Machines In The Fleet.

Price Wars Are An Aspect Of The Rental Business That Is Almost Endemic, And Something That Contractors Will Naturally Take Advantage Of. But As Rental Companies Are Quick To Point Out, If Contractors Want A Healthy And Resourceful Rental Sector-Providing Good Equipment And A Reliable Service-Then It Has To Be Paid For. Quality Comes At A Price.