Recent economic evidence for the Eurozone remains muted. Eurozone growth picked up in the fourth quarter, reflecting strength in retail sales, new orders and, importantly, business and consumer sentiment. The Markit Eurozone sentiment indexes all improved at the end of 2016, with the services index showing strong results, the manufacturing index finally moving into positive territory and consumer sentiment becoming less negative. Political risks are elevated, however, with elections due in 2017 in Germany, France, the Netherlands, and probably Italy. 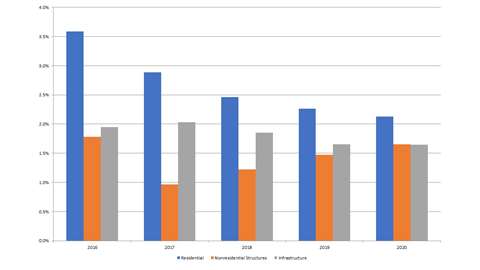 Even so, aggressive monetary stimulus, a weaker euro and reduced fiscal headwinds will help sustain growth. With inflation picking up only gradually, the European Central Bank (ECB) is not expected to raise interest rates until late 2018. The euro is projected to fall to parity with the US dollar by the end of 2017 before gradually recovering. Ireland, Spain and Sweden will maintain healthy economic growth, but the United Kingdom, Italy and France will struggle. After a 1.7% advance in 2016, real GDP growth in the Eurozone is projected to increase 1.5% in 2017 and 1.6% in 2018 before settling back to 1.5% in 2019.

The UK economy has been resilient since the Brexit vote, supported by robust gains in consumer spending. Growth is likely to slow in 2017. Following the Brexit vote, the UK has indicated that it would like a clean break, reflecting the likelihood that any negotiations will prove difficult, since EU leaders will not want to set a precedent for an easy withdrawal. Lingering uncertainty about the terms and impact of Brexit will dampen foreign and domestic investment, employment, and ultimately consumer spending. On the plus side, more accommodative fiscal and monetary policies will support growth. As Brexit triggers capital flight, the sterling will depreciate further, with the threat of inflation. This will boost UK exports, however, and once trading relationships are clarified, the currency will begin to recover. 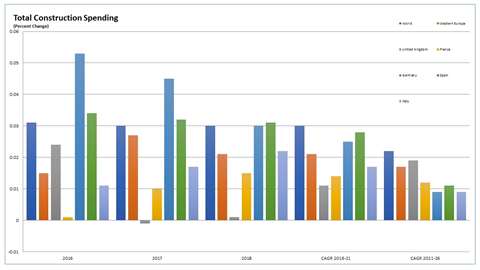 Residential will be the fastest-growing construction segment in the near term, easily led by Norway (6.5%), Sweden (5.4%), Germany (5.2%) and the Netherlands (5.0%). Germany gets its boost near-term from the need to resettle refugees, and growth fades later in the forecast. In Sweden, rising real incomes and past tax cuts have elevated demand for housing and put strong upward pressure on prices. Sweden is now one of the top-five highest valued property markets.

Norway’s result is also a function of increasing residential values as much as underlying demand. Honourable mention goes to Spain with 4.0% growth in 2017. However, Spain features a recovering housing market, so the country can potentially maintain nearly that pace over the next five years, even as growth in the other leading markets begin to taper off.

The Irish housing market also continues to recover from its downturns with 3.9% growth. Irish home prices have been increasing since mid-2013, and a recovering labour market (Ireland is a key beneficiary of Brexit), lower taxes on income and rising confidence levels suggest that the Irish housing market will continue to improve at a compound 3.3% rate over the next five years.

At 1.8% growth, non-residential structures had their best performance in a decade in 2016. However, the modest outlook for Western Europe’s economic recovery suggests that growth will fall back to 1.0% in 2017 and 1.2% in 2018, with job gains and rising confidence sparking office and commercial construction.

Industrial construction spending will lead growth in the near term as the weak euro and sterling encourage exports. Indeed, while growth slows, industrial construction remains the growth leader over the next five years, as the weak euro is reinforced by improving oil prices pushing up refinery profits. In general, northern Europe leads nonresidential structure growth; compound annual growth over the next five years features Ireland at 3.3%, Finland at 2.9%, Germany at 2.8%, Sweden at 2.3% and Denmark at 2.1%. Spain’s nonresidential sector recovered to 4.5% growth in 2016, and the outlook calls for 3.0% compound annual growth through 2020. The non-residential structure growth leader for Western Europe is Greece at 3.4% in 2017 with five year growth averaging 2.5%.

Infrastructure spending is subdued with an outlook of 2.0% growth for 2017 and just 1.8% average over the next five years. Fiscal austerity is winding down, but tax revenue growth will remain challenged. Norway (4.2% CAGR) leads this segment, followed by Finland (3.6%), Turkey (3.5%), and Germany (3.2%). The middle of the pack features the recovering economies of Spain (2.3%), Ireland (2.1%) and Greece (2.0%). Finland and Germany feature nearly 5% growth in 2017, but tail off relatively quickly. Norway has used infrastructure stimulus to offset a sharp retreat in petroleum investment. While oil prices have improved of late, infrastructure projects typically take years to complete, so the optimistic outlook remains likely. Turkey remains committed to major infrastructure development, including nuclear power and water transportation projects.

The differential between a moderately strong ‘northern’ Europe and a weaker ‘southern’ Europe market persists with this forecast. Spain is the exception within southern Europe and actually offers the strongest growth in 2017 at 3.1%. Of course, much of this is a base effect – recovery from a deep hole – but the importance of the recovery should be noted.

Germany offers the second fastest growth in 2017 at 3.0%. While some of that will dissipate as the refugee crisis abates, the country will remain among the growth leaders with 2.5% compound growth over the next five years. Finland, the Netherlands, Norway and Sweden offer five-year compound growth on a pace with Germany.

France has held the middle ground, but is poised to grow more in line with southern Europe at 1.4% CAGR as economic and political uncertainty abound. Portugal will return to growth in 2017, but construction spending will still expand at just a one percent rate over the next five years. Italian construction returned to growth in 2015, but uncertain political and financial cloud the near term, with just 1.7% growth expected. Turkey has been improving as the political view solidifies. Growth improved to 2.5% in 2016, and we expect some improvement to 2.8% over the next five years.

The construction outlook is mildly positive, but most of the region can only expect slow growth. The lower euro assists export intensive countries, and tourism related construction, but the larger issues of international competitiveness, excessive regulation and weak population growth remain constraints on investment.