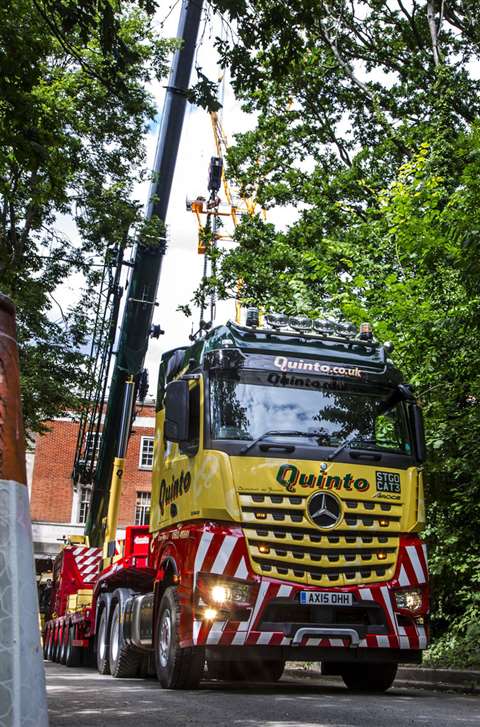 A new Mercedes-Benz heavy haulage tractor and Nooteboom trailer have joined the fleet of Quinto Crane & Plant in the UK.

The Norfolk-based company has new owners who recently spent £1.1 million (US$ 1.7 million) on a new Grove all terrain crane. The new truck, which is a 155 tonne Arocs 3363 S and the trailer, a six axle low loader, will be used to move counterweight slabs for the new 300 tonne capacity crane. The combination will also be put to work moving demolition equipment and other heavy loads.

Husband and wife Oliver and Hannah Arnold bought Quinto in 2014. They have invested £2.5 million in the fleet, with more to come and launched the demolition division of the company earlier in 2015. Oliver Arnold said, “There is a construction-related synergy between our established lifting and machinery moving services, and the new demolition and dismantling operation, which will benefit our clients.”

Norwich dealer Orwell Truck & Van supplied the 460 kW (625 hp) Arocs. It has a Voith Turbo Retarder Clutch as does the new Manitowoc Grove GMK5250L all terrain crane. It works with the 16-speed Mercedes PowerShift 3 automated transmission for pulling away with heavy loads and to help brake the vehicle which can have a gross combination weight of 250 tonnes.

“We have to get into some tight and awkward places and after driving one of our previous ballast lorries I realised that for low speed shunting its traditional dry clutch just wasn’t up to the job,” said Oliver Arnold, “The new truck is now up and running and the system is proving every bit as flexible and cost-effective as we’d hoped – it’s given us a capability that we were seriously lacking previously.”