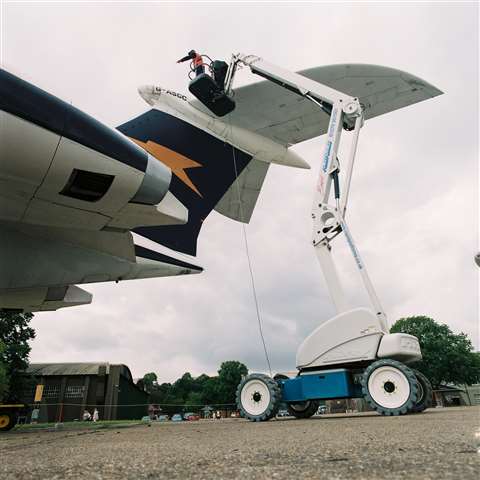 Access provider Rapid Platforms has assisted in the preservation of a Vickers VC10 aircraft at the Imperial War Museum’s (IWM) Duxford site in the United Kingdom (UK).

The company was called in to assist the Duxford Aviation Society, which needed to undertake essential refurbishment work to the aircraft’s tailplane.

The voluntary organisation, which owns and maintains The British Airliner Collection and is partnered with the IWM, sought Rapid Platform’s help when its own powered access equipment proved too short.

Part of the AFI group of companies, Rapid Platform said it conducted a site-survey and recommended a 20.8m Hybrid Niftylift HR21.

Peter Archer, chairman Duxford Aviation Society, said, “Because they know the Duxford site and the area, Rapid Platforms were able to recommend the Niftylift mewp.

“Our engineers used the machine so that they could get over and around the tailplane of the VC-10, to work on that particular part of the aircraft.”

The VC10 is a British built commercial aircraft that operated from the 1960s to the 1980s and still holds the record for the fastest sub-sonic transatlantic crossing.