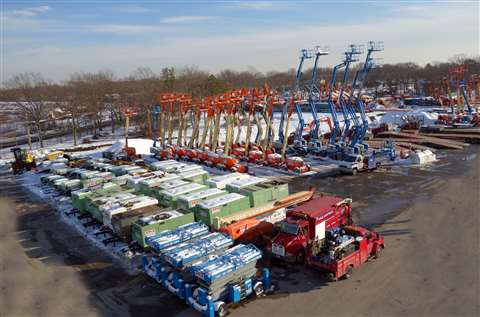 After a typical winter storm, Able’s yard is pictured here covered in snow.

Steve Laganas, co-founder and treasurer of Able Equipment, doesn’t shy away from the fact that Able started out as a rigging company. In 1986, the company was involved with New York construction and industrial markets and provided rigging services to customers. Able had been called upon to dismantle a test tower that was being used to test radar for a local company, but it needed equipment beyond its scope – it needed access equipment.

“We decided at that point that we wanted to venture into new opportunities,” Laganas says. “That’s how we go started with the aerial division. When we were hired to dismantle that tower, we needed aerial lifts and that’s how we got started with the knowledge of the aerial side of business. We sought out suppliers and started to buy equipment and rent it out to our customers and also looked for new opportunities and customers.”

The company started with Condor lifts and then quickly added JLG and Genie units. “We saw the writing on the wall,” Laganas says of the aerial industry.

In 2013, Able invested in $13 million worth of equipment and the company says it expects to do at least $6.5 million of capex this year, with 80 percent of that total going toward aerial equipment. Able currently has two Genie 180-foot booms on order and they are looking to purchase two to three more 150-foot booms.

“We’re top heavy on the heavier iron more so than the smaller iron when it comes to aerials,” Laganas says. “However, we will purchase more 20-foot, 26-foot and 32-foot units as well as some more rough terrains from Genie, as well.”

While Able doesn’t have specific jobs that are requiring the tall booms, Laganas says the tall units will be used for bridge work in the New York, New Jersey and Philadelphia areas. “We anticipate having those units in work on that type of construction,” he says.

It’s obvious Able is experiencing growth – not just refleeting. The company had a 35 percent increase in rental revenues from 2012 to 2013 and while they remain somewhat humble about 2014’s expectations, Laganas, notes a new location will help the company extend its reach.

“We don’t really know what to expect for 2014 but we are opening up in a new market and we’re looking forward to work in Philly,” he says. “While we experienced an increase in market share that was predominantly in New York, and maybe a little in New Jersey, I like to try and be modest about the growth we’ll see in 2014. We are anticipating a 20 percent increase in rental revenues.

The company already has a lease signed in Pennsauken, NJ which is just outside of Philadelphia. The location will serve the Philly markets. Despite the regional expansion, Able has no plans to reach further into other areas of the U.S.

Laganas says work in the Hudson Yards – New York’s second-largest privately funded construction project outside of Rockefeller Center – will be one of the company’s bigger projects, but that bridge and general construction work is what keeps Able at the top.

“Our rental rates are up over last year,” he says. “The most we were down in total rental revenue was 12 percent, which was very good compared to probably most of the other rental companies being down closer to 30%. We were able to maintain most of our business and while rental rates were affected, we anticipate being able to raise our rates in 2014 a couple percentage points.”

Laganas attributes the semi-steady business during the downturn to its focus on service. “The way we’re growing is because of our level of service,” he says. “New York rebounds a lot quicker than a lot of other places. We’re the last to fall and the first to rise.”

For the coming year, Able will continue to monitor growing sectors, including the telehandler market, which the company saw a rebound in rentals for in 2013. “We have stepped into higher capacities,” he says. “We have a 12,000-pound unit and a 20,000-pound unit, as well. The norm for this market was always 10,000 pounds, but we’ve increased capacities for some of our larger projects and for the material handling needs of our customers.”

Able, which has 773 aerials in its fleet consisting of booms and scissor, says its success is in thanks to relationships.

“We try to build relationships with customers,” Laganas says. “Independents have an advantage in markets like New York mainly because we’re way more nimble than the larger companies. Anybody who wants to speak to either myself or anybody else that makes decisions can get us at any time and at any moment’s notice. New York is definitely different than other parts of the county in respect to response time. We respond quicker. We have great repair capabilities. We respond to deliveries fast. The people who work for us are company people. They are really dedicated to our goals.”