Three new Caterpillar articulated trucks – 730, 730 EJ (Ejector), and 735 – have been extensively redesigned, enhancing the features and performance of their C-Series predecessors (730C2, 730C2 EJ, and 735C) with new operator stations. 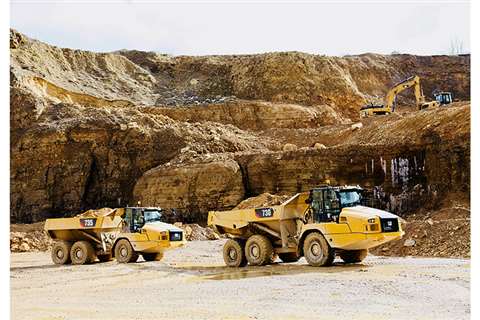 In addition, the design of the 730 and 730 EJ is enhanced with automatic retarder control and a hill-start feature. The 735 retains these features from its C-Series predecessor and further incorporates significant design refinements that include a new Cat C13 ACERT engine, Cat CX31 transmission (also on the 730 and 730 EJ) and structural and dimensional modifications that reduce empty weight by 22%. The company says that these features combine for an up to 19% gain in fuel efficiency.

The cab’s new external ‘spinal-ROPS’ design incorporates a rear-quarter glass that eliminates a structural pillar in the C-Series design, for enhanced rear visibility. The door is of a lighter, stronger design with a shut-assist feature for improved sealing against dust infiltration. The overall cab design results in lower inside sound levels at 72 dB(A), a reduction from previous models.

Optional new infrared glass reduces solar heating inside the cab, and left- and right-hand sliding windows increase ventilation and facilitate communication with workers and the loading-vehicle operator. A new, automatic climate-control (HVAC) system positions more vents above and behind the operator for increased heating and cooling efficiency. A new heated/cooled seat is designed to give operators increased adjustments.

Global construction industry to grow by 5.7% in 2021
Report predicts construction to see good growth in 2021, although issues such as lack of materials remains a concern
Loading...
Previous Next ×