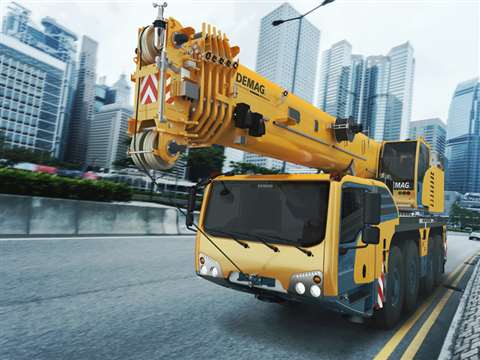 Terex Cranes has announced that, following consultation with its customers, it has redesigned the Demag AC 100-4L all terrain crane to improve lifting performance, especially when working with steep main boom positions. The main change is that the crane now features the Demag IC-1 Plus control system as standard. The four-axle crane has also incorporated many of the features of the Demag five-axle portfolio to help simplify servicing and reduce costs, said Terex.

According to the company, the Demag IC-1 Plus control system instantaneously provides the crane’s maximum lifting capacity, based on the slewing angle, for every crane configuration as opposed to limiting the maximum lifting capacity to a pre-calculated, 360° load chart based on the most unstable position of the crane. This, it claimed, is particularly useful when working with reduced outrigger settings and reduced counterweight. Terex also said it enables the Demag AC 100-4L to perform jobs where higher capacity cranes are typically needed and it gives customers the option of using less counterweight, resulting in reduced transport costs.

Crane servicing has also been simplified, said Terex, thanks to the four-axle AC 100-4L now incorporating many of the same design concepts as the Demag five-axle crane. From the drivetrain and the assembly for drive components to the boom head and main boom extension designs, Terex explained that its customers will find more parts are interchangeable with those of other Demag all terrain cranes, reducing spare parts inventory costs and storage space required.