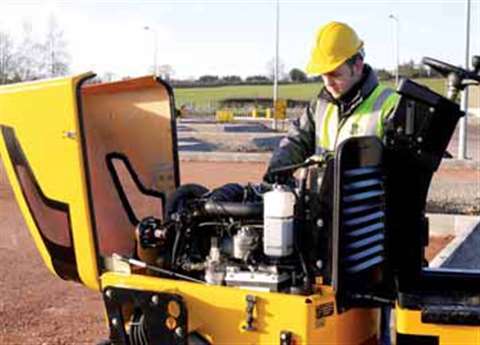 The VMT160 from JCB Vibromax has high-capacity fuel and water tanks to help keep the machine on the job.

The actual performance of new compaction equipment-their ability to effectively squeeze together particles of soil and asphalt-seems to be almost taken for granted in the latest manufacturers’ brochures. Instead, the features and benefits given most space are often those that will most appeal to rental companies.

For example, Hamm's promotion of the seven-model expansion of its HD Compact line of tandem rollers, up to 4 t and 1400 mm of drum width, emphasises the simplified servicing afforded by its design. All maintenance points of the engines and hydraulic systems are on one side of the machines, easily identified and accessible under the opened bonnet without a tool.

Additionally, the water tank drain is under the driver's seat and the system's filter, which is self-cleaning, is integral to the cap. Oil is drained during changes directly through a side hose into a carrier can; there is no need for collection under the chassis.

Hamm, part of Germany's Wirtgen Group, “...is sending a message to the market,” with the expansion of the line from the three models introduced at Batimat last year, product manager Gottfried Beer tells Hamm has added seven models to its HD Compact line of rollers, raising operating weight of the line to 4 t and drum width to 1400 mm. Pictured is the HD 8.

Machine features attractive to rental for reasons other than maintenance include: controls that require no language skills to master; a single lifting point for transport; a locking cover to block access to the control panel; and 3-point articulated steering.

Don't be fooled, however. Hamm also clearly points out the compaction performance that comes from the line's design: operator visibility, offset and single-side suspended drums (on the smaller models), and large-diameter drums that provide “50 to 80% greater centrifugal force,” says Hamm.

Other manufacturers have simplified servicing as well. Dynapac's three, new, high frequency (HF) tandem asphalt rollers, the CC424HF, CC524HF and CC624HF, also have all their filters on one side, and the machines’ hydraulic hoses can be replaced in individual segments, avoiding the need to fit a full length. An additional simplification is that technicians can replace their drum shock absorbers without removing forks or drums.

The machines, which replace the CC422, CC522 and CC622 models, use a double pump vibration system. Doing so eliminates the need for a vibration valve, which makes the system more efficient and aids servicing and reduces fuel consumption, says the Swedish company

JCB Vibromax, which has completed the first full year under ownership of JCB, emphasises the large-capacity fluid storage containers used on its new tandem vibratory rollers. The VMT 160 and 260 models have 45 l diesel fuel tanks and 95 l water tanks, keeping rental users on the job longer and increasing productivity, says the company.

Operator comfort leads the benefits touted by Ammann for its 2100 kg RW 1805-SPT trench roller, the smallest in its single-drum roller range and replacement for the RW 1800. Its operator stand sits on rubber bearings for vibration isolation, and the Swiss company has reduced noise levels of the machine. A Lombardini 3-cylinder, 30 kW engine powers 64 kN of centrifugal force as well as higher capacity hydraulics.

Wacker has a new roller in the market, too: the 1,5 t, 900 mm drum width, model RD 16 vibratory roller. It has double-drum drive and a one or two drum vibration option. A 16,5 kW Lombardini engine powers the machine, which generates 15 kN of centrifugal force per drum at 70 Hz.

Continued operation causes MSM to shut down the machine. “If the engine shuts off, then they have to take care of it [the problem],” marketing manager Rüdiger Raabe tells IRN.

The system includes a microprocessor data chip that controls start-up, helps prevent theft and stores run time and failure condition information. The MSM option will be available on the German company's CR 6, 7, and 8 models (those above 400 kg in weight) from July and costs about €2000.

The standard Compatrol feature is available with the electric start option on the CR 3 soil compactor, which Weber has redesigned to reduce vibration and noise and to make more manoeuvrable. The approximately 200 kg machine now also has a thicker cast-iron base for better stability and an improved dust filtration air intake system, and also comes in petrol and diesel, recoil-start versions.

Ease-of-use was also Weber's design objective for the latest version of the SRV 620 vibrating tamper. It has a lower centre-of-gravity and new guide handle. The 65 kg machine will come to market in October with a 4-stroke Honda GX 100 engine with an improved air filter.

Belle Group in the UK also recognises rental owners’ need to reduce damage to equipment. The company has been delivering its PCX 20A vibrating plate with a double frame since January of this year, and the PCLX 320/400 model will have one after July. Also, Belle has planned to launch in May the 49 kg PCEL 320X, which is about 10 kg lighter because of elimination of the water tank in its sister model's design.

Also developed specifically for rental are Ammann's three reversible vibratory plates in the 300 – 450 kg weight class, the AVP3920, 4920 and 5920. Called the “Rental Line”, they compact in 450, 600 and 750 mm widths and are powered by Honda petrol or Hatz diesel engines. With variable hydraulic forward and reverse travel, they develop 39, 49, and 59 kN of centrifugal force at 65 Hz.

Meanwhile, top of the list of features that reduce service requirements on Stone Equipment's new, 4-cycle, petrol-engined Stompers is a quadruple fuel filtration system. This virtually eliminates contamination of the fuel supply, says the US company, and an extra-large, heavy-duty, air filter system maximises filter surface.

Forcing together particles of soil and asphalt may be the fundamental aim, but doing so in a way that makes life easy for rental companies seems to be getting just as much attention.