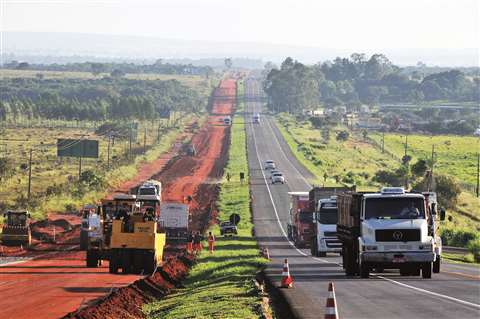 Road projects in Brazil have seen concession bids for improvement

New governments in Latin America offer hope to a region that has recently struggled economically.

Brazil is the largest country in South America, not just in size, but also economically. With a population of over 200 million and Gross Domestic Product (GDP) of over US$2 trillion, the region’s attention is fixed on the new president of Brazil, Jair Bolsonaro, who has said, “We will facilitate things for investors who want to build and maintain infrastructure in Brazil, through a consistent plan of public-private partnerships and privatisations.”

In fact, Jair Bolsonaro’s government has already begun fulfilling the promise made to open the country’s economy to the international market.

In just three months of management, the new government has begun an agenda of concessions and privatisation. So far, the state’s asset disposal program has managed to generate concessions (the right to use land or property for a specified purpose, granted by a government) for a highway and 12 small and medium sized airports in different parts of the country.

Contractor CCR group won the concession for a 473.4km stretch of road in the south of the country, under the condition of widening the portion of the road which was transferred to the company. In the next 30 years, CCR must invest a figure close to US$2 billion on this development, improving travel in the two southernmost states of Brazil. 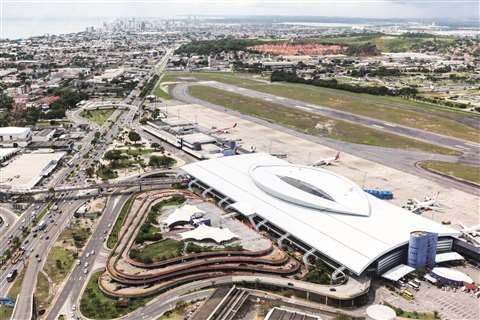 In the first airport auction, the Brazilian government raised US$620 million

The 12 airport concessions were pushed for by the Ministry of Infrastructure as part of a plan that aims to accept bids for another 20 airports to be auctioned off to concessionaries later this year.

In the first of these airport auctions, the government raised US$620 million, ten times more than the state required for the 12 concessions. Critics of the government claim that the minimum set price was too low.

At a recent event in the city of São Paulo, the new government’s infrastructure minister, Tarcisio Gomes de Freitas, said, “The minister aims to optimise public and expand private investments in infrastructure, in addition to unlocking works and renegotiating concession contracts that are unbalanced.

“We have to be able to show foreign investors that Brazil is a safe port in which to invest, and that our projects are well structured and with total legal certainty.”

However, if economic growth does return to truly significant levels, the existing infrastructure will not be able to withstand the increase in demand for electricity. Aware of this, the new government announced the public auction dates for advance energy purchases. There will be an auction each year from now to 2021 for contracting electricity generated by new plants.

The Brazilian electrical sector regulatory agency announced the approval of the auctions in December 2018, which involved construction, operation and maintenance projects of 7,152km of lines and substations, valued at around US$3.4 billion in 13 states of the country.

Unfortunately, Argentina has not seen the same economic growth as Brazil, with the country recently experiencing three successive quarters of recession. In May last year the Argentine Peso was valued at US$0.041 but it has fallen by almost half that value, and is now worth US$0.022.

The Argentine Institute of Statistics and Censuses published the country’s inflation rate during January. At 2.9%, this is more than Chile saw in the past year. 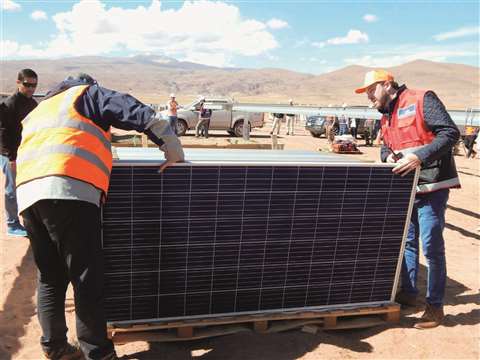 The Cauchari Solar Power Plant will consist of 1.2 million solar panels and provide 300MW of power

The need for extra power and future-proofing the energy supply, has also been felt by Argentina. The Argentinian government has set a target for renewable energy to account for 20% of its energy consumption by 2025. The current figure sits at 4% but an increased drive for renewable fuels through hydrocarbon extraction projects will also contribute.

This project has also received sought after international investment. Development is being primarily backed by the Export-Import Bank of China (China Exim) which will finance 85% of the total US$390 million total cost.

According to economists, last year Argentina suffered a sudden stop in the flow of international capital. Until that is reversed any long-term large-scale infrastructure project is unviable.

The Institute of Statistics and Registry of the construction Industry (IERIC), has stated that although employment growth maintained a rate of 2.7%, this was primarily driven by the first months of the year. In the last quarter a fall of 3.7 % was recorded.

Moving on, there are plans for a project that will link Argentina with Chile. The Tunel de Agua Negra project is a 13.9km project that will connect the two nations through the northern central zone of both countries. The infrastructure will have two circulation tubes, one way each.

Investment of around US$1.5 billion is required, which would be financed by the Inter-American Development Bank (IDB). Once completed, Chilean and Argentine authorities project a daily flow of 2,200 vehicles, with 70% of them being commercial. 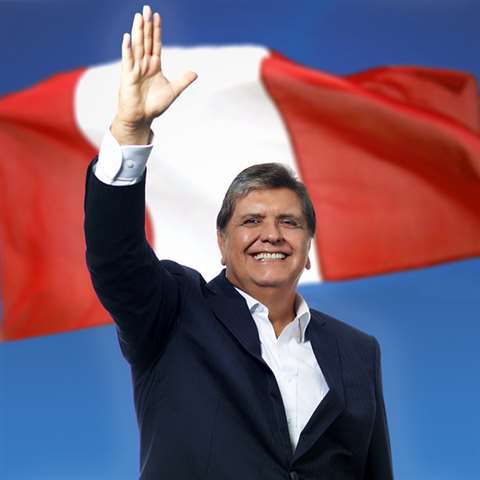 Nothing shows the political turmoil seen in the region more than the recent suicide of former Peruvian President Alan Garcia, whose name has been dragged into the corruption scandal of Odebrecht, the largest contractor in Latin America.

This year also saw the resignation of Garcia’s successor, Pedro Pablo Kuczynski, in order to himself concentrate on his defence after allegations allegedly linking him to the Odebrecht scandal. His place was taken by Martín Vizcarra, who announced the launch of a national infrastructure plan, to be ready this year. According to Proinvestment, Peru must invest US$160 billion between 2015 and 2025 in order to reduce the country’s infrastructure deficit.

At the end of last year, the Minister of Economy and Finance in Peru, Carlos Oliva, reported that this year the Peruvian economy would lead economic growth among the countries of the region. According to Oliva, the country would grow approximately 4.2% in 2019, above the expectations of Brazil, Chile, Colombia and Mexico.

This projection was based on investment in new mining, hydrocarbon and infrastructure projects that will be in operation this year. Among these, the expansion of port terminals, the modernisation of the Jorge Chávez Airport, the country’s main airport, and the execution of six regional broadbands are key projects.

In addition, the country would have an important portfolio of projects to execute up to the year 2021, which would demand investments close to US$6 billion. 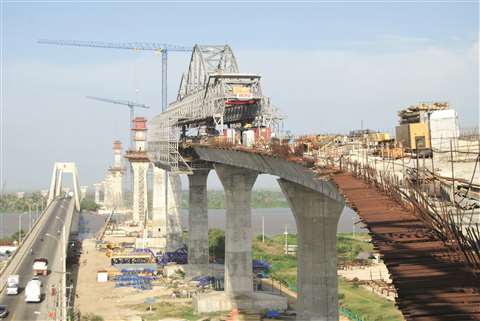 The Pumarejo Bridge requires an additional US$264 million to complete the project. It was originally planned to be finished in December 2018

Colombia’s new president, Ivan Duque, has committed himself to construction and has said, “I hope that in these four years [infrastructure] is a transformer of Colombia. Our task is to conclude that the work of my predecessors is not despised by political interests.”

There was, however, political uncertainty in the months leading up to the elections in May 2018, which had an impact on ongoing projects.

According to recent information, in accordance with the GPI infrastructure management platform, of the 94 works handled by Colombian government agencies, 41% of the works have seen difficulties, forcing some contracts to cease and funding sought for others.

An important case is the Pumarejo Bridge, which was scheduled to be ready on 31 December. In November, the head of the Colombian National Roads Institute said that the government is seeking US$264 million to complete the works.

Despite this, Colombia is expected to be a leader in the region in terms of construction, projecting a growth of more than 5% between 2019 and 2022, according to the vice president of exports of Procolombia. 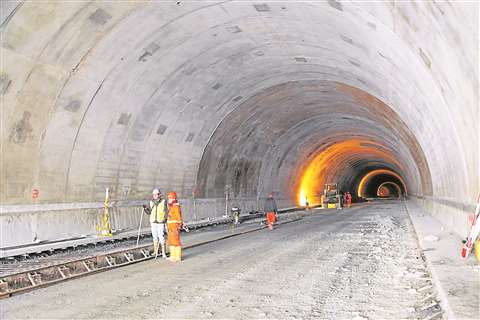 One of the most anticipated mega projects by the Colombian capital is the Bogotá Metro. The first line is planned to be in use in 2024.

This important infrastructure work will be 24km long, have 16 stations and a 13m viaduct on the ground. Investment of about US$4.3 billion is needed and the contract is expected to be awarded this year.

Another project, the Line tunnel, will connect the interior of the country with major ports.  When completed, it will be the second longest road tunnel in Latin America. So far, the tunnel has cost over COP$2.2 trillion (US$655 million) but the project has suffered technical failures, a lack of resources, and failed to comply with technical norms. Originally scheduled to be open in 2016, opening is currently delayed to December 2020. 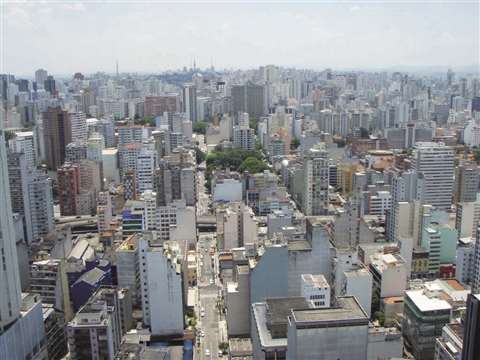 Brazilian real estate projects in 2019 have experienced an abrupt decline

The real estate market in Brazil, the most important subsector in the country’s construction industry, displayed a rapid deceleration in the first quarter of 2019.

According to data released by the Brazilian Chamber of Construction, the number of new real estate projects fell more than 60% in the first quarter of 2019, compared with the previous quarter.

The fall indicates that the Brazilian recovery has not gone as expected. Although the new government has presented measures to generate business confidence, the level of economic activity remains low and the outlook for growth for 2019 fell from 2.5% to just over 1%.

Brazilian construction remains highly dependent on the market for residential and commercial buildings, given that other large infrastructure is not being undertaken.

In the same year-on-year comparison basis, sales of real estate increased 9.7%. However, in relation to the previous quarter there was a fall of 18.9%.

In summary, real estate construction experienced growth in 2018, but this year began to collapse. Of the five regions of Brazil, only the Northeast continued to grow, with 25.7% more property launches in the first quarter of this year compared to the previous quarter.

In the richest regions of the country, São Paulo, Rio, Minas Gerais and Espírito Santo, the fall between one quarter and another was no less than 77.4%.