By Cristián Peters and Neill Barston18 May 2015 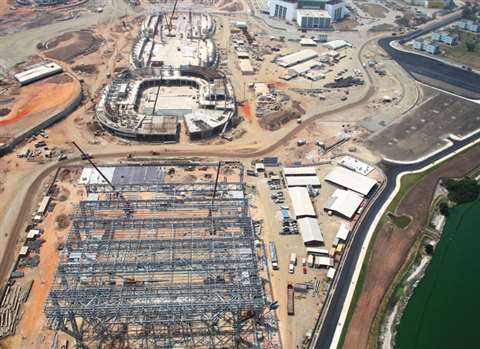 Barra da Tijuca, Rio, where a number of sports venues are under construction for the 2016 Olympic Games.

Economic conditions in Latin America remain disappointing. The Inter-American Development Bank (IDB) forecasts annual GDP growth of +3% over the next three years, compared with the +4.7% a year annual average in the pre-crisis years.

The Economic Commission for Latin America and the Caribbean (ECLAC), shares concerns over the region’s economies. This has led to it revising forecast growth rates for 2015 down to just +1%.
ECLAC warns that uncertainty in global financial economies, particularly in Europe and Japan, could potentially impact on Latin America.

The weak economic outlook is of course a problem for the construction industry, although the picture across the region is uneven.

The Inter-American Federation of the Construction Industry (FIIC) has said the Latin American market is worth some
US$ 320 billion per year. While some countries have faced unsettled political and economic conditions, others within the 18 nations covered by FIIC have delivered above-average annual growth.

For example, in 2014, Colombia’s construction sector expanded by +10.7%, which included a US$ 25 billion roadbuilding programme.
There was also growth of +7% last year in Panama, thanks largely to the huge scheme to enlarge the Panama Canal. This is believed to be the largest construction project in the world today.

But the market that really counts in Latin America is Brazil. Unfortunately, it is also one of the most troubled following the emergence of a huge corruption scandal at the state-owned oil company Petrobras.

The case involves allegations that senior executives at the company demanded bribes from construction companies in return for contracts. This led to Brazil’s Federal Public Ministry to issue fines totalling US$ 1.39 billion against five Brazilian contractors including OAS, Camargo Correa, Mendes Junior, Galvao Engenharia and Engevix.

Last month, two of these companies, Galvao and OAS, filed for bankruptcy protection, saying they are owed large sums on work carried out for Petrobras.

The scandal has provoked a huge public outcry, with 500,000 people demonstrating against Petrobras in Rio last month, which has placed pressure on the government. An impact on the national economy and the construction sector looks inevitable as the investigations continue.
Earlier this year, the CEO of Petrobras Maria das Gracas Silva

Foster, stepped down from her position, amid ongoing investigations into the company that uncovered a reported
US$ 8.9 billion of suspect payments and bribes to politicians.

To date, more than 100 people have been charged in connection with Petrobras investigations, including Joao Vaccari Neto, the treasurer of Brazil’s governing Workers’ party. In total, 50 politicians are being investigated.

In March, Petrobras confirmed it would start a US$ 13.7 billion divestment programme to reduce its debts. This has also seen a number of Petrobras construction projects being halted, which is having an impact on the industry.

Government figures showed the Brazilian construction sector employed nearly 3 million people last year. But there have been a reported 241,580 total job-losses since allegations against Petrobras emerged in September 2014.

The country’s National Association of Road Work (Aneor) has also expressed concern that a group of companies is awaiting payment on federal road schemes, delayed due to government budget cutbacks.

In spite of these challenges, there is hope on the horizon, with forecasts for growth surrounding large-scale public works being carried out with the Programa de Acelercao do Crescimenton (PAC) and staging the 2016 Olympics, with its major infrastructure requirements.

Brazil’s near neighbour Argentina has its own unique challenges, including facing ongoing legal cases relating to the country’s 2001 sovereign debt default. One of the key means of delivering economic recovery has been in attracting overseas infrastructure investment, which has emerged from both China and Russia.

Argentinian President Cristina Fernández has targeted energy independence for the country through increasing its national power generation capacity and facilities. As part of this, the president has signed an agreement with her Chinese counterpart Xi Jinping to build two new nuclear plants in the country.

The two nations are also involved in a US$ 4.7 billion project to construct two hydroelectric dams, the Nestor Kirchner and Jorge Cepernic dams in Santa Cruz, Patagonia. President Fernandez described the schemes as “Argentina’s most important hydroelectric project in our history”.

The past two years has seen trade links between wider Latin America and China expand. In January, a second China-CELAC (Community of Latin American and Caribbean countries) summit between heads of state was held in Beijing, aiming to identify potential investment opportunities in Latin America.

Since the first event in Brazil last year, the Chinese president has unveiled plans to invest US$ 250 billion in Latin America over the next decade. The country is behind major projects in the rail sector, mining, oil and hydropower.

This includes development of the Grand Canal of Nicaragua. The proposed US$ 50 billion scheme, which covers a 278 km route, is designed to offer an alternative to the Panama Canal, and is led by Chinese developer HKND.

Such is its scale, the project has attracted concerns over its financing, as well as its potential environmental impact.

The Colombian construction sector is growing at one of the fastest rates in the world, driven by infrastructure investment.

While the country’s growth has been driven by factors including its oil export industry and IT sector, major schemes such as its national highways development have played their part.
Among these schemes is a 100 km project in Western Colombia, the Transversal Medellin-Quibdo, which will improve regional road connections when operational from next year.

Other forms of infrastructure are being proposed, including the Ituango hydropower plant, on the Cauca River, in the Antioquia region. This huge 2,400 MW scheme is due to begin in 2018.
Meanwhile, in Panama, the expansion of the Panama Canal is one of the region’s most high-profile infrastructure projects.

As part of the venture, the group has designed a new set of locks for the canal. However, it is in a US$ 234 million dispute with its client, the Panama Canal Authority, concerning allegations over the quality of the basalt used as aggregates for the project.
Besides improving its shipping routes, Latin America has turned its attention to enhancing rail systems.

Among major schemes due to be developed is a US$ 4.4 billion project for the Mexico City to Queretaro high-speed rail link. This has had its difficulties, as Mexico’s Ministry of Communications and Transportation has re-tendered the contract. It was due to be built by China Railway Construction Corp, but was cancelled amid concerns over the bidding process.

There have also been complications in Brazil, over the country’s plans for a high-speed rail project linking Rio with Sao Paulo. The US$ 16 billion, 510 km scheme has suffered several cancellations over budget issues.

Elsewhere in the continent, the focus for the rail construction sector is on metro schemes. Among key developments has been the approval last year for a US$ 5.4 billion extension to Lima’s metro in Peru. This will link with the Peruvian capital’s airport and is to be built over the next five years.

Improving transport infrastructure is a major concern in Chile, where a consortium is to redevelop Arturo Merino Benítez International Airport, Santiago.

The project will focus on the design and construction of a new 175,000 m2 terminal, which will increase capacity to 30 million passengers per a year. Astaldi and Vinci Construction Grands Projets are due to start work on the five-year project in October.

One of the main transport upgrades in Mexico planned new US$ 9.2 billion airport for Mexico City, which would be the largest in Latin America. The 470,000 m2 terminal and three-runway facility is to be designed jointly between the UK’s Lord Foster and Fernando Romero Enterprise. It is to be developed using sustainable design principles, based around a compact single terminal.

With major schemes such as this under way in Latin America, there are signs of cautious optimism, despite challenges faced by some countries in the region.