Reinvention: How one Detroit rental house turned business around 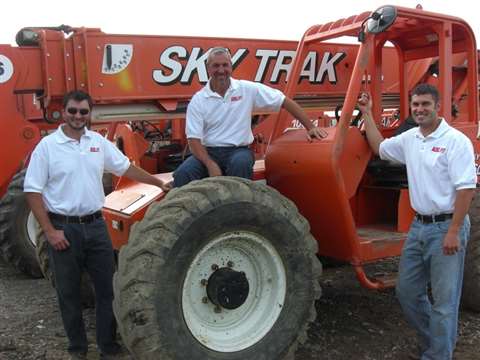 When times started to get financially rough, Jim Koontz asked himself, "What am I going to do with my life?" The president of Detroit-based SkyTrak rental depot, Aero Lift, Inc. wasn't only worrying about his life, he was worrying about his family's lives as well.

The Koontz family tossed all sorts of ideas around - from car washes to associated businesses - but Jim Koontz didn't think he could reinvent the wheel. "I'm old-line thinking," Koontz says. "I don't really think a guy like myself has the ability to create a new business model and IT or anything sophisticated like that, so [my ideas] really typically leaned toward our strengths."

With a plant facility on site, Koontz knew the machine shop could come in hand, but just didn't know how - until he received a phone call one day asking for a drive line component.

"We had just taken in a machine on a trade that had blew an engine and I thought, 'Man, I don't want to put any more money into this thing,'" Koontz says. "So we parked it and scratched our heads. Then that fellow called and asked for a drive line component, and, frankly, that was our 'A-Ha!' moment."

Koontz brought the idea up to management but it was like "pushing a boulder up a hill," he says. "[The dealer house] didn't really want to get involved with that."

So he left and started to accumulate used telehandlers because, simply put, he liked them. "Initially I had what I call 'alphabet soup' - I had every brand and I was doing [all this work] single handedly," Koontz recalls. "As the old saying goes, 'Business was so good, even an idiot could make a living,' and I was going to prove it."

With Detroit having a large SkyTrak population - between 2,000 and 2,500 SkyTraks within a 68-mile radius of downtown Detroit, Koontz says - it was easy for him to focus on one brand.

"The used equipment business offers a tremendous advantage in that you look at it in the rearview mirror," Koontz says. "The new equipment delaers are always trying to predict what's going to happen. They're always trying to serve the new market and there's always a race to be new and improved. The used equipment business, you can go out and say, 'What lives? What do people like? What has customer acceptance?'"

And with that large SkyTrak population already settled in Detroit, Koontz says it was an easy decision to center in on the one brand. "It's a tremendous sort of market experiment that has already played itself out and all you have to do is go get that product," he says.

Koontz is a true go-getter. "I kept trying to get better at business," he says, explaining he is the type of guy who tries to improve anything he's doing for the next time - even if it's only taking out the garbage or getting milk. "I try and do it better than the last time - it's just one of my guiding principles," he says.

As he improved business, his oldest son Steven joined him five years ago. "It allowed us [the time] to go after smaller contractors who couldn't afford equipment, who might not want to pay the long dollar that dealers and the United Rentals were charging, but who also wanted someone they could relate to - someone like myself who was, at one time, 'one of them.'"

Then the recession hit - and it hit Michigan hard. "Detroit initially was the epicenter of ground zero for the softness of the market," Koontz says. "We've lost a million jobs, it's not a pretty picture."

With business slowing, the Koontz family - over one of those familiar morning breakfast meetings - agreed on one thing: during the recession people are going to hold onto their equipment longer. And if they hold onto their equipment longer, repairs are going to be more frequent. With repairs comes the need for parts - and that SkyTrak's engine just went down the tubes.

"We are cannibalizing machines," Koontz says. "As we retire our machines from service, we disassemble them, label them, clean them up and inspect them and put them back on the shelf."

Koontz believes that new equipment dealers oftentimes put a lot of effort and emphasis on new machinery, new parts from the shelf and training for their mechanics - saying their efforts are really geared toward satisfying and servicing the new equipment business.

"However, the used equipment business is going to show incredible strength right now and is underserved when it comes to parts - yes, new equipment dealers can get them, but oftentimes, just the opposite of what you think is true," he says. "I have the part on the shelf; cleaned, inspected and ready to ship that afternoon. New equipment dealers don't have it and when they call the manufacturer for an axle end or an oddball drive component, it may be a three-week lead time."

Aero Lift is a lean operation - for the family, eldest son Steven is the machine and mechanical expert and Matt, the younger son, is being groomed for marketing, sales and website design, the eldest Koontz says. "We do everything we possibly can in-house. We rely on outsiders for virtually nothing. I buy some tools, and I buy fuel, but we do all the taking apart in house."

Having completed eight "cannibalizations" already with no real set schedule other than the company has identified the next three they will take apart, there currently is a telehandler Aero Lift is about to dissemble right now. "I have an 8024 legacy from a local mason contractor here who had oversupply and after some arm wrestling, I got him on a decent number," Koontz says. "He might not agree to that."

On average it takes three to four days to dissemble a unit. "It's pretty intense to take one apart," Koontz says. "It takes a solid effort, then you have to clean it up, label and stock. Some of this is still a work in progress."

Customers have found Aero Lift by doing Internet searches for "SkyTrak parts" or "used SkyTrak parts" after something in the field has gone wrong, Koontz says. "A guy goes [out to the field] and looks at it and produces a list with repairs and suddenly it's going to cost $5,500 [for a wheel]," he says. That's when the customers' own wheels start turning and they head to Koontz who will walk people through the repair if needed.

"Sometimes we know that repair better than the dealer because we've had a fleet of 40-50 of these things for four or five years," he says.

People still ask Koontz why he would ever give up a cush job being vice president to taking apart telehandlers in jeans and t-shirt. "If you're wired the way I am, you're going to be an entrepreneur," he says. "I used to tell people, 'If you could just quit what you were doing today - selling insurance or practicing law - and you could rebuild Harley's or Cameros or porches or just something that you could fool around with all day long, would you do it?' and almost unanimously they all say, 'Yes!'"

And that's what Koontz is doing; he's fooling around with something he loves. His kids are by his side, he has good days, "which there's still more than not" and he overall feels better today than yesterday.

"We have to use a different set of metrics to define success right now," he says. "You can't say, 'What is my profit? How much have I made this year?' because all of these metrics will drive you crazy - they're out of your control.

"The market is up and down, you go home and see birds on TV swathed in oil, it's just non-stop. You have to ask yourself if you are making progress in your business, are you doing something worthwhile. 'Am I taking care of myself physically, spiritually and mentally? Am I better today than yesterday?' Then you can rest at night a little more comfortably."

Koontz says this type of thinking and advice has guided him his entire life, and even more so since he founded the parts service. While Detroit still suffers, Koontz says he's seen a few basements being poured for new housing starts and that where they had previously been stopped to zero miles per hour, they're now slowly rolling along.

"I've been at this aggressively for a long time and it has become my identity for better or for worse," he says. "When it works, my life is real cool adventure. I've yet to meet the man I'd rather be."