Bredenoord, Haulotte, Volvo CE and Germans Homs were among the winners at the 2019 European Rental Awards, held in Madrid on 15 May.

Haulotte had special reason to celebrate, winning product of the year for the first of its Pulseo electric machines, the HA20 LE, and seeing its founder and CEO, Pierre Saubot, honoured with the lifetime achievement award. 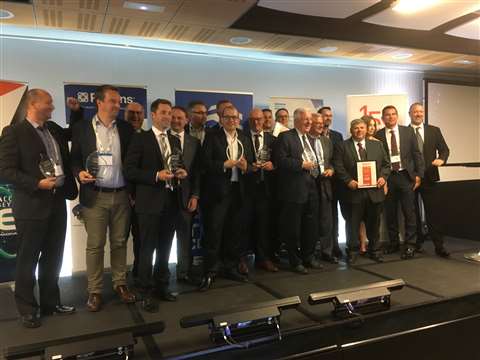 More than 280 industry delegates attended the awards at the Meliá Castilla hotel in Madrid during the European Rental Association’s (ERA’s) annual convention. The awards are jointly organised by ERA and International Rental News (IRN) magazine.

The winners and shortlisted companies were:

The judges said: “Bredenoord is to be congratulated not only for its continuing growth, but for leading the way in developing innovative battery-powered rental solutions.”

The judges said; “Germans Homs has been performing strongly and is an innovative company. In 2018 it continued to develop its online rental offering.”

The judges said: “The HA20 LE is a very strong product, and as the first of Haulotte’s all-electric Pulseo range, it makes a strong statement on electrification and sustainability.”

Haulotte’s Pierre Saubot (right), winner of the 2019 Lifetime Achievement Award, with Ray Caulfield of Trime, who won the same award in 2017.

Rental Person of the Year

The ERA Sustainability Committee said: “The new policy launched by Loxam in 2018 - ‘Safety, Anytime and Anywhere’ - demonstrates the commitment of the company to safety among its other commitments to society.”

The ERA’s Technical Committee said: “Volvo has demonstrated a continuous commitment to the satisfaction of the needs and requirements of the European rental industry. We are very pleased to recognise their involvement giving them the ERA Technical Committee Award.”