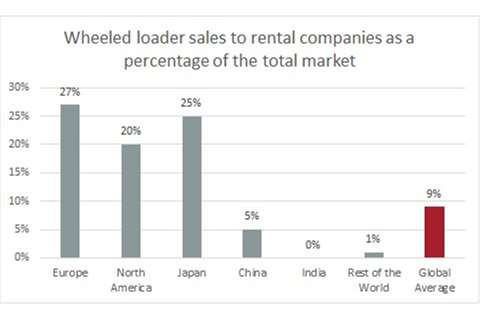 Off-Highway Research managing director, Chris Sleight, said, “In most markets construction contractors are the largest wheeled loader customer group. The exception is Japan, where slightly more unit sales are made to rental companies than contractors. In Europe and North America rental tends to be the second most important group – behind contractors, but ahead of traditional applications like mining and quarrying.”

He continued, “However, in emerging markets wheeled loader rental in the sense of distinct and specialised industry is almost non-existent and accounts for only a few percent of sales. Equipment rental does go on in these countries, but it tends to be quite localised and informal.”

The underlying factor here was a sharp increase in infrastructure investment by the Chinese Government and through the Public Private Partnership (PPP) model. Off-Highway Research said that wheeled loaders were declining in relative popularity in China due to the rise of compact and crawler excavator and ‘economical’ wheeled loaders as alternative tools.