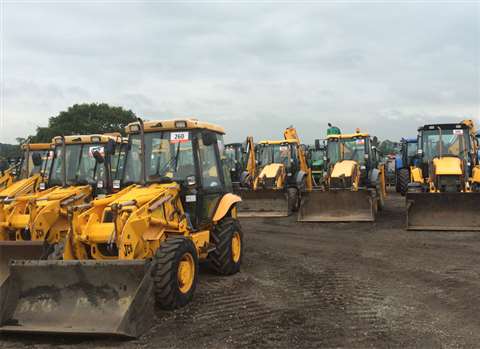 More than 30 wheeled loaders were sold at the Donington auction

Auction company Ritchie Bros held its 15th and largest-ever auction in the UK this month, selling a site record of more than 1,600 items at Donington Park, in the English Midlands.

The unreserved public auction also set new site records for number of bidders, at more than 900, and sellers, over 120. All items in the auction were sold without minimum bids or reserve prices, and bids were placed in person at the Donington Park auction site, live online and by proxy.

He said, “With record attendance for this auction, we experienced competitive bidding both onsite and online. It’s encouraging to see that even with the strong pound, our UK auctions continue to attract competitive bidders from across Europe and the rest of the world.”

There will be an indepth look at auctions and used equipment in the September issue of Construction Europe.