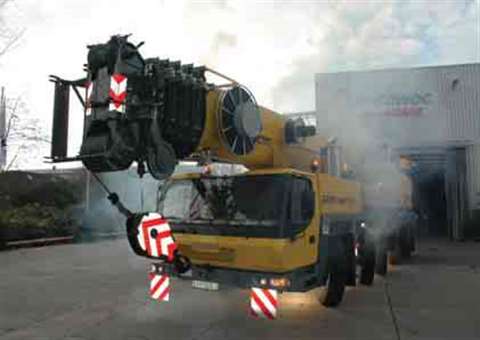 Dutch rental house Riwal was the first to take delivery of Grove's new 130 tonne capacity GMK 5130-1 all terrain mobile crane in a handover ceremony held at the Grove facility in Langenfeld, Germany on 3 December.

The handover was part of an open house event attended by more than 100 customers who were invited to see, among others, the new five axle crane, which was announced at Bauma 2004 in March last year.

Other models on show at the event were the 80 tonne capacity GMK 4075-1 and the 55 tonne GMK 3055. Also on display was a selection of used mobile cranes and a new Potain tower crane.

Riwal has also recently enlarged its rental fleet with, among others, Liebherr's MK 100 mobile folding tower crane and Aichi FR300 mini crawler cranes. It has also recently placed a US$ 38 million order with JLG for more than 1000 access platforms.

For more information on the new Grove GMK 5130-1 all terrain see a future issue of IC.