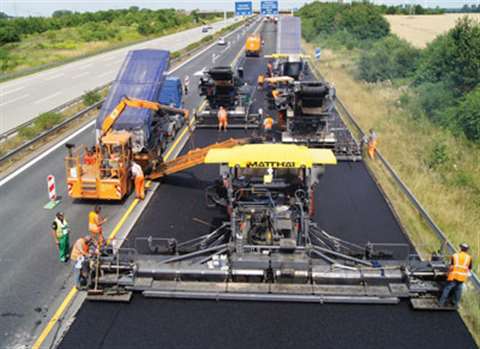 There was a time when building a road involved laying material, compacting it and hoping that at the end of the day it met the client’s specifications.

The problem with that approach is the uncertainty for the contractor throughout the project. It’s better to know as you go along whether the road is going to meet a developer’s requirements, and better still to be able to document and prove the quality of the work.

Technology plays a central role in the development of modern roadbuilding equipment, and a string of new machine control and telematics systems have been introduced to the market in recent years. The aim is to increase the accuracy of roadbuilding operations and boost efficiency.

LSBB is responsible not only for the tendering of construction projects, but also for inspections during the construction work.

In addition to inspections of the asphalt mix during paving, selective core samples are taken when the project is complete. These samples are used, among other things, to determine compaction levels and test the quality of the road.

The new Moba Pave-IR Scan system measures the temperature over the entire area during paving. Using this data, it is possible to draw conclusions about possible weak points in the road, according to Moba.

The authority worked with contractor Matthäi to scan the asphalt repaving of the northbound lane of the A14 using the Pave-IR system. The concrete surface was removed on a section approximately 1km long over a width of about 8.5m.

The components of the Pave-IR scan system – an infrared temperature scanner, a GNSS antenna for precise positioning and an on-board computer – were installed on the paver used for the surface layer. The temperature sensor scanned the paved asphalt temperature every 250mm with an accuracy of ±2oC.

Guido Schwabe, who oversees the construction work on behalf of the LSBB, said,
“Previously, it was only possible to measure the temperature on a random basis. With the system, this is possible over the entire area and continuously for the entire project.”

The authority plans to use the Pave-IR Scan system again on another state road resurfacing project in 2014. Following this second test, it said it would decide how to integrate this new option as a standard requirement in tenders in the future. The Pave-IR Scan system is expected to be available for the European market in early summer 2014.

Elsewhere, manufacturers of compaction machines are working hard to improve the performance of their equipment, and are introducing technology that reduces noise and vibrations felt by the operator.

Volvo CE has recently launched new soil compactors in the shape of the SD75, SD115 and SD135 models, for instance, and the operator was at the centre of the designs.

“Vibration is essential for efficient material compaction, so distancing and protecting the operator from this represents a significant step.”

All Stage IIIB emission compliant and fitted with the new turbocharged 4-cylinder Volvo D4 diesel engine producing between 75 and 110kW, the new models are said to offer more power, greater efficiency and up to a 30% reduction in fuel consumption over previous models.

Across all three SD compactors, high and low amplitude and frequency is available as standard, while a five-frequency selector is available as an option for even greater optimisation when matching drum frequency to material type. Furthermore, diagnostic systems provide real time data through the new Volvo Contronic instrument panel.

A Volvo Smart Power mode is also available as an option on both the SD115 and SD135, which is said to help reduce fuel consumption without having any adverse effect of compaction performance.

The new CB22B, CB24B, CB24B XT, CB32B, CB34B, CB34B XW, CC24B and CC34B compete in the 1.8 tonne to 5 tonne size classes and are designed for the rental market. Suitable for jobs including compacting smaller areas such as streets, bike paths and parking lots, the machines also boast improved visibility and lower fuel consumption.

An eco-mode can be activated for reduced fuel consumption and lower sound levels. In addition, the water spray systems have a large capacity and provide up to 10 hours of operation without refilling.

On the milling side of the roadbuilding market, Wirtgen has developed a new generation of point-attack cutting tools and an HT22 quick-change toolholder system.

The manufacturer is aiming to maximise the performance of milling machines through ensuring perfect interaction between the milling drum, toolholder and point-attach cutting tools.

The generation X point-attack cutting tools were developed in collaboration with Wirtgen’s long-standing systems partner Betek. The result is said to be a robust cutting tool with greatly enhanced wear resistance and enormous cutting power for high milling output.

The geometry of the carbide tips, for example, is said to extend the service life by up to 20% in relation to conventional cutting tools, with constant high milling output.

At the same time, Wirtgen said development of the new HT22 quick-change toolholder system has made it possible to double or more the maximum useful life of the toolholder upper part, and significantly increase the service life of the milling drum.

The manufacturer’s cold milling machines and their milling drums began to be equipped with the new HT22 quick-change toolholder system in August this year, and it can also be retrofitted in existing machines.

The new machine will replace an existing road repair machine at the company’s surfacing business.

The S550H will be used for repairing potholes, surface cracks and ice damage, as well as for milling surfaces and for work around manholes. Both the planer and the sweeper can be attached to the skid-steer using the quick-change Bob-Tach attachment mounting system.

With its ability to turn around in its own length and fast cycle times, the Bobcat S550H skid-steer loader provides Sangwin Surfacing with the manoeuvrability and productivity needed to do more work in less time than other types of equipment, according to Bobcat.

In the asphalt mixing sector, Asphalt Drum Mixers highlighted its RoadBuilder series of plants – machines which it claimed offered precise control of mix designs at the lowest cost per tonne of any parallel flow asphalt plants in the same class.

The series comes in four production sizes – 99, 145, 226 or 317 tonnes per hour. A parallel flow system is said to maximise heat transfer through the mix by using the manufacturer’s flight design to move the moisture-laden aggregate in a rotating veiled pattern away from the burner.

A fuel-efficient Hauck gap-fired StarJet burner produces the dryer flame, which is shaped to minimise asphalt cement burn-off. This is said to result in cleaner emissions than other parallel-flow designs.

Both stationary and portable RoadBuilder options are available. It is claimed that the portable plants could be installed within a few days, featuring self-erecting silos that require one person and under 15 minutes‘ set-up time.

Falsework and formwork manufacturer Alsina, meanwhile, has been busy supporting construction of the 550km S8 expressway in Poland.

It was awarded the contract last year. The road will connect Wroclaw, Lodz, Warsaw and Bialystok, and includes 10 overpasses of 6,000 to 8,000m3 each, as well four prefabricated tunnels.

Alsina Poland supplied the manufacturer’s Multiform System for bridge boards and its AR-80 shoring system – a support structure for slab formwork with a high load capacity of 80kN for support – for the project.

The company said using the Multiform System for bridges was key to efficient construction.

This is described as a versatile, modular system that adapts to a wide variety of geometries for bridge decks, wide-angle slabs, viaducts, underpasses and overpasses.