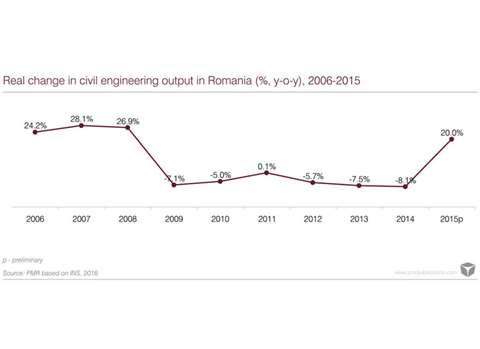 Construction activity in Romania accelerated vastly in 2015, rising 10.4% year-on-year, compared with a modest rise of 1% in 2014.

The latest report by research company PMR reveals that the increase was primarily due to an overwhelming increase in the civil engineering subgroup which, according to preliminary estimates, increased year-on-year by 20%.

PMR said that the political factor is thought to have been the key impetus behind the negative rate of growth in construction activity in Romania in 2012 and 2013 and only a marginal rebound in 2014.

It said that it believed the government had deliberately reduced capital investments during those years, in order to have more financial resources to increase benefits to the population.

In 2015, revenue from the sale of engineering construction services is estimated to have accounted for 45% of total construction output.

PMR stated that the performance of civil engineering construction in Romania relies largely on public funding in areas which make up this market subgroup. In particular road, railway and environmental infrastructure. Within civil engineering work, transport infrastructure has accounted for 58 to 63% of the total work in each year since 2008.

One of the main reasons behind the falling civil engineering activity between 2009 and 2014, according to PMR, was the low degree of EU funds absorption. Within the Structural and Cohesion funds for the programming period 2007 to 2013, Romania was allocated €4.3 billion to be spent on transport infrastructure. However, Romania was able to absorb only 63% of the €4.3 billion allotment.

Finally, PMR said that Romania is poised to continue to improve its absorption capacity for developing funding, given that in the 2014 to 2020 programming period, it is due to have access to €5.1 billion of EU funds for the development of its transport infrastructure, which is 19% more than in the previous period.