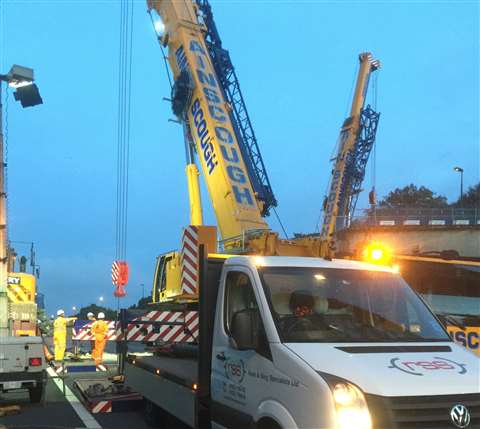 Ainscough has named RSS as its preferred rigging supplier

The UK's largest mobile crane rental company operates from 30 locations in the UK, while RSS recently opened its fifth location close to Ainscough’s depot in Hayes, near Heathrow Airport, to the west of London.

Steve Hutin, RSS managing director, said the potential partnership factored into his plans when choosing a second facility in the south of England. The other, in Aylesford, is only a short drive from another Ainscough depot, in Maidstone (both Kent). There are also Ainscough sites to the east (Cardiff) and west (Carmarthen) of RSS in Bridgend, south Wales.

Hutin said, “Ainscough’s existing presence in the area coupled with its proximity to a number of major projects we are already working with made Hayes a prime location. Ainscough has a wide range of lifting equipment around the country and logistically it is a challenge to have the required below-the-hook support everywhere and all the time — that’s where we step in.”

RSS plans to open its sixth facility soon. Hutin said, “We anticipate that contract crane lifts and other activity involving the heavy cranes, in particular, to generate a requirement for our equipment but the appeal of the partnership is the rental company’s diverse fleet that will work in cohesion with our full range of spreader beams, shackles, wire rope slings, chain clocks, web slings and more.”

Mark James, operations director (south) at Ainscough Crane Hire, said, “With the largest fleet of cranes in the country, we value partners in the field giving us access to below-the-hook and other equipment. These partnerships enhance our expertise and rigging solutions in the variety of scheduled and emergency lifting applications that engage our mobile fleet on a daily basis.”