Ruthmann has opened its new Bavarian service center. The new location will cover all previous service needs from the company’s previous spot in Ingolstadt. Ruthmann invested €2.4 million and more than seven months of construction to get the service center up and running. 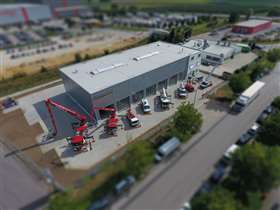 As part of the expansion initiative, Michael Zabel, service center manager, and his 11-member team moved into the new Bavarian service center. The service facility is in a large industrial park in Geisenfeld (Ilmendorf district.)

Ruthmann said since it was “not able to expand at [our] previous location in Ingolstadt, the company decided to build an entirely new service facility. Located just 15 km from Ingolstadt – on Germanenstraße in Geisenfeld-Ilmendorf – the ultra-modern service center has 13 service bays and a large wash bay.”

In November 2017, an additional service center in Merklingen (Alb-Donau district in Baden-Württemberg) will be put into operation.

Construction is scheduled to begin in 2018.