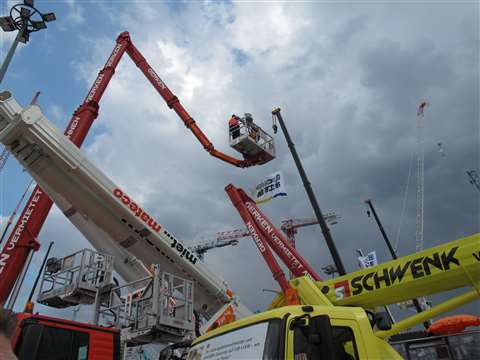 "We also have optimized the standard telescoping and movable aluminium working cage," Schlingschröder said. "It can be extended in width hydraulically from 2.42 m to 3.82 m."

The four outriggers of the new T 720 can be controlled individually from the rear on both sides of the vehicle. "This feature facilitates better judgement when jacking and increases safety at the jobsite," Schlingschröder said. "The outriggers can also be controlled using the alternate control on the passenger side or directly from the control panel located in the working cage. The automatic-retraction mechanism saves valuable time and is very user-friendly."

The new unit comes after Ruthmann's biggest year in sales ever, having earned €95 million in 2012; a 27% increase over the previous year. Schlingschröder said since the High Performance Series was launched, the company has sold 55 units. “We’ve never built so many big machines before,” he said.

The company also used Bauma to announce forthcoming models. In August, Ruthmann will debut the 38-meter-working height Steiger T 380. As well, in the fall in 2013, the company will release a modified version of its current Steiger T 720.