The United Kingdom-based RVA Group has overseen the demolition of two 55 m (180 ft) high chimneys at Barking Reach Power Station, east of London, as the site gets one step closer to its new lease of life. 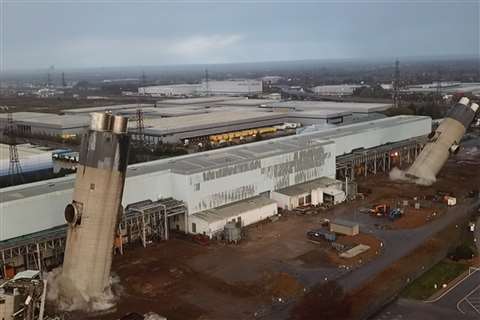 The concrete stacks with steel flues were brought to ground in only 10 seconds each, via the controlled use of 10 kg (22 lb) of explosives.

Mindful of nearby stakeholders – including a petroleum fuels depot only 200 m (650 ft) away – the early Sunday morning demolition was co-ordinated to minimise disruption and ensure maximum safety standards.

With the 17 ha (42-acre) site visible from the A13 carriageway, road closures were enforced, and the collapse mechanism was designed to avoid any structural damage to the main turbine halls – which remain intact.

Five 2,500 t boilers have also been felled using traditional demolition techniques. This work was carried out in the late evening, over a six-week period, when the peak rush hour traffic had passed.

The sequential demolition was planned by RVA in an exercise which began in 2014. Engaged by Barking Power – part of Canadian firm Atco – RVA was initially appointed to undertake various front-end engineering services, including costings studies and the provision of help to de-rate the site. The coal-fired assets were closed in the same year, before various options were investigated for the site’s future.

The demolition project was then officially kickstarted last year, with RVA returning to deliver its suite of works execution services, including project and EHS management.

“With Barking, there was the added complexity of protecting the turbine hall and its contents.”

In December 2018, media reports confirmed that the City of London Corporation had acquired the site and was considering its future use as an iconic wholesale food market.