Four complex structures have been successfully brought to the ground by the controlled use of explosives, on the site of a power station’s redundant units in Sardinia. 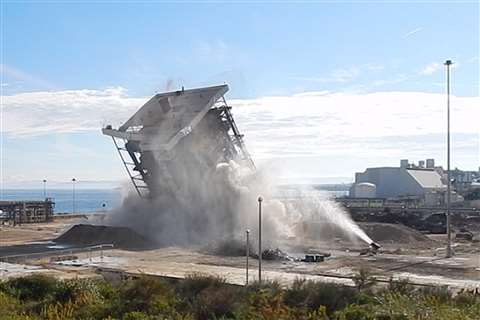 The two old oil units of EP Produzione’s thermoelectric plant in Fiume Santo – each with a nominal power of 160 MW – were permanently shut down in December 2013, after supplying energy to the Italian island since the 1980s.

A phased decommissioning programme has been underway since the closure, but specialist consulting engineers from the United Kingdom-headquartered RVA Group were appointed last autumn, to interrogate and oversee the use of explosives on the site.

A 100 m (328 ft) weather tower, a 150 m (492 ft) reinforced concrete chimney and two 50 m (164 ft) high steel boilers weighing 2,000 t were demolished in only five seconds each. The blowdowns took place as three individual midweek operations, with 50 kg (110 lb) of explosives used throughout, but this meticulous assignment took more than 12 months to prepare for.

“Explosives engineering was the preferred technique for these assets because of the height of the structures,” said RVA explosives expert Charles Moran.

“It was considered safer to demolish them remotely than expose employees to thousands of unnecessary hours working at height.

“Given the complexity of the project and the several counterparties involved, a constant dialogue was needed with local and national institutional bodies responsible for environmental authorisations and the import of the explosives. Our technical knowledge and experience was certainly placed under scrutiny”.

Using a shaped-charge technique specified for the boiler demolition, RVA worked with explosives contractor Tecnomine and author of the blasting projects Mr Mikula, to develop the methodology. Test blasts were also attended in Spain to refine the explosives design before the blowdowns took place.

Of around 8,000 t of resulting material, all has been recycled, with the concrete processed through a local crushing plant and the steel being sent for scrap. Main contractor AVE – based in the Czech Republic – is now dismantling the remains of the boiler and clearing up the wider site. 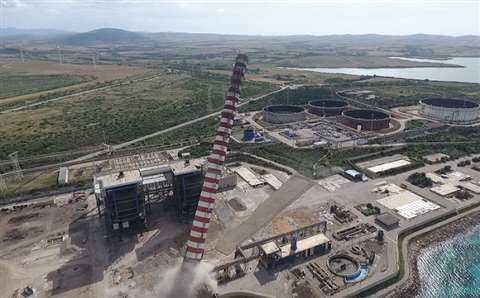