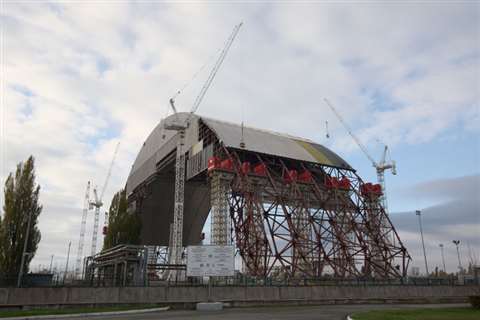 Italian-based Safi has been awarded a contract to build a special industrial elevator for use at the Chernobyl nuclear reactor in the Ukraine aheads of its dismantling.

Novarka consortium, which includes Vinci and Bouygues Construction, has carried out the work to construct a confinement shelter around the damaged nuclear reactor to prepare for the later dismantling of the reactor.

The New Safe Confinement is being built to seal off reactor 4, which was exposed in the 1986 nuclear accident in Chernobyl. At 110m high – taller than the Statue of Liberty and wider than the Stade de France – the structure is designed to protect the environment from radiation releases and provide the infrastructure to support the deconstruction of the shelter and nuclear waste management operations.

In the latest stage of the project two parts of the arch that make up the New Safe Confinement have been assembled. The operation involved aligning – down to the millimetre – 243 connections along the 260m width of the shelter, a giant structure made of steel and which is said to weigh five times as much as the Eiffel Tower at 30,000 tonnes.

Under the contract from Novarka, Safi will supply a 4.5 tonne capacity, 55 m high elevator inside the reactor, now encased in the confinement shelter. It will be equipped with sophisticated electrical components and two huge electric gear motors with a high level of nuclear radiation resistance. It will include a device for fast evacuation of workers, in minutes, in case of an unexpected alarm or accident.

The rack & pinion elevator will be installed in a shaft inside the Chernobyl reactor to transport personnel and materials from a purpose built warehouse designed to support the team involved in the maintenance and dismantling of the reactor. The elevator has been built with a special material to avoid the negative effects of radiation inside the cabin.