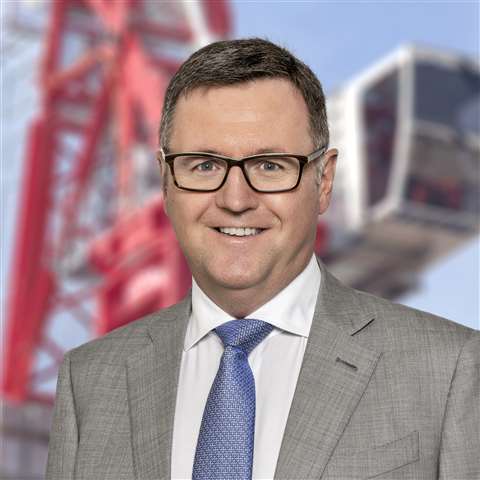 Salt was previously head of sales and service at the Switzerland-headquartered company. Salt takes the CEO title from Peter Schiefer who will retain his position as delegate of the board of directors.

Commenting on the move, Peter Schiefer said, ”We have grown immensely since then and have reached a point where it is no longer feasible nor in the interest of the company for one person to head the executive management, while at the same time fulfilling the duties of the delegate of the board. In order to po-sition ourselves best for the future and successfully continue growing our business, we need to enhance our organisational set-up now.”

Duncan Salt said, ”My goal is to drive the symbiosis between lifting services and crane technology. We are uniquely placed at Wolffkran and through a greater emphasis on our common goals we will position Wolffkran at the forefront of our industry setting benchmarks in service, quality and innovation.”

Salt has a degree in mechanical engineering and started in the construction industry with UK-based contractor Laing O’Rourke. In 2005 Salt started in tower cranes, as Select Plant Hire general manager in the Lifting Solutions division. Next was a move to UK Wolff dealer and rental company HTC Plant as director and general manager. The move to Wolffkran came in 2015 after the company acquired HTC. He was responsible for international sales before taking overall responsibility for sales in January 2017.