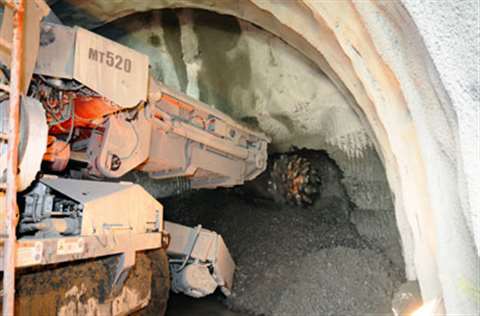 One of Sandvik's first MT520s at work on the Bilbao metro system.

Sandvik Mining and Construction has launched a new class of roadheader for tunnelling in medium to hard rock. Sandvik says the modular design of the MT520 means it can be adapted to a range of conditions, while the 8 m cutting height means it is well-suited to large road tunnels.

Roadheaders are less common in tunnelling than the use of drill & blast techniques or tunnel boring machines (TBMs), but Sandvik says they can provide an excellent solution in the right conditions.

According to Josef Pichler, the company's product line manager for road headers, these tend to be medium to long tunnels (500 m to 2.5 km) of a medium cross-section (40 m2 to 90 m2), where TBMs would be too expensive. Roadheaders also have an advantage over drill & blast because there is very little vibration, which can be crucial in urban tunnelling jobs.

Sandvik's MT520 weighs in at between 115 and 120 tonnes, depending on the attachments and options. The cutter - either an in-line unit for soft rock (10 MPa to 40 MPa) or a transverse cutter for material up to 100 MPa - is mounted on a telescopic boom. In standard configuration this offers a cutting height of just over 7 m and a width of around 10 m (depending on the cutter). An optional extension package takes the maximum cutting height to 8 m and the width to above 10.5 m.

The picks of the cutter head are cooled by 28 water nozzles on the boom, and there is an option for a high-pressure water pump to take the spray up from 10 to 30 bar. "This provides a much better fog of water at the face and cuts the dust by about a third," said Mr Pichler.

The cutter motor itself is a 315 kW unit, and Mr Pichler said the first few MT520s in the field were showing a 'net productivity' of about 40 m3 excavated per hour. That refers to just the time when the cutter is engaged in the face and is excavating. It excludes repositioning time and so on.

The front of the MT520 features a loading table with an 840 mm wide central conveyor with a spinner on either side to feed material into it. The conveyor, which has a 600 mm height clearance, travels under the machine and out to the rear, where it is elevated for truck loading. As Mr Pichler said, "The big advantage of a road header is that you can cut and load at the same time."

The MT520 comes with a range of options. Among the more significant ones is the addition of a 160 kW diesel power pack that enables the machine to be moved when it is disconnected from the electrical power supply. Others include a swivel discharge belt, automatic fire suppression, cable and water hose reels and of course the additional height module.

A spacious pressurised cab is standard, and the MT520 features a sophisticated computerised control system with in-cab displays. This can be augmented with Sandvik's roadheader guidance system, which monitors to position of the cutter relative to the designed tunnel profile thanks to the use of a total station in the tunnel and receiver prisms on the back of the machine.

What the operator sees is a graphical display that is green when the cutter is within the design profile, but which turns red as soon as it moves outside. This not only makes the cutting operation efficient, but also saves on extra material when it comes to lining the tunnel.

"The over profile with this system is only 5 cm - an absolute maximum of 10 cm," said Mr Pichler.

"Now about 50% of road headers in construction go out with a guidance system. In the future I think it will go up to 90% because once customers have used theses systems they really see the benefits," he added.

Sandvik is keen to develop the machine further, and says it can increase its flexibility by mounting attachments on it to carry out reinforcement work. This could include shotcrete nozzles, attachments for handling steel support arches, booms for installing bolts, man baskets and so on.

It is an area where Sandvik is seeking feedback from its customers and is keen to provide the right options.

"Technically we could put anything on the machine, but then you would have a Christmas tree, and that wouldn't work underground. The aim is to make the machine as productive as possible," said Mr Pichler.

Sandvik already has two MT520s in the field - one cutting tunnels for Line 3 of the metro system in Bilbao, Spain, and another working in Sochi, Russia on infrastructure work linked to the 2014 Winter Olympics.