In spring 2022, the Tennessee Valley Authority (TVA) initiated a major nuclear refueling and maintenance outage so that four replacement steam generators could be installed at the Watts Bar nuclear plant – one of the USA’s newest commercial nuclear reactors. 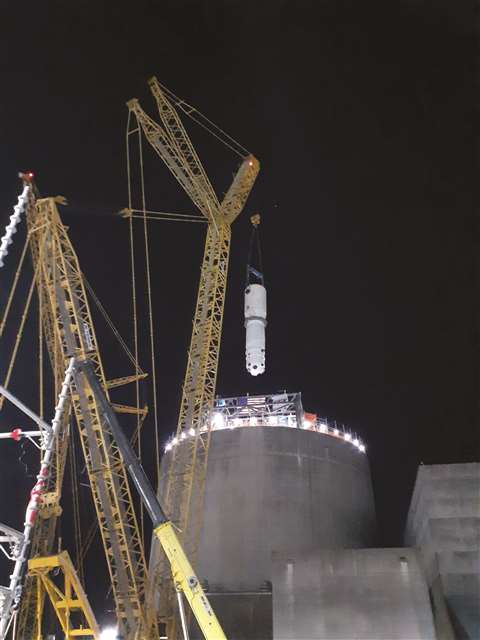 Sarens was called in to perform several major lifts for this high-security, high-stakes operation.

The team’s first mission was to remove two concrete dome sections at the Spring City, TN site. Sarens built two lift and support frames for the three-foot-thick concrete cutout, which was then water blasted for removal while the crew carefully monitored jack pressures and tensions. They used a Terex CC 8800 crane to remove two steel dome liner sections, four steam generator cubical roof sections and four old steam generators. These were lifted through cutouts atop the containment building, transitioned to a down/upending device and transported via SPMTs to a concrete storage facility.

Next, the Sarens team installed replacement dome liners, covers and four new steam generators, which were brought in from storage and upended so they could be sent through the roof of the containment structure. The new steam generators weighed approximately 800,000 pounds and measured over 68 feet long, with a nearly 16-foot diameter and 168-foot radius.