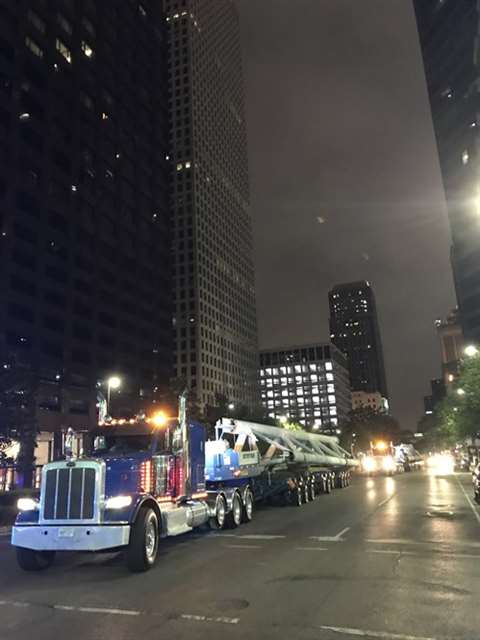 Sarens recently transported the foundation pillars for the Bollinger Canopy of Peace at the World War II Museum in New Orleans. These seven pillars will support the entire canopy structure, which stands 150 feet tall and is designed to unify the museum campus.

The pillars were trucked in by a third party from Mexico to the Port of New Orleans, where they were completed to their larger dimensions and stored for several months. While each piece was of a different size, the largest was 88 feet long, 20 feet wide, and weighed 46t.

To transport them to the museum campus, Sarens chose equipment that was under 17 feet high to allow access under downtown tram lines and manoeuvre around tight streets which included several turns, street furniture, and other obstacles en route. Trailers had to be suited to the job, as well: they had to be extending, hydraulic, and able to be manually controlled or steered.

The Sarens crew used the following equipment for the transportation operation:

The equipment all came from the Sarens depot in Houston, Texas and arrived for port unloading in about seven hours.

To transport the pavilion pieces to the museum, Sarens had to determine a suitable route to accommodate load size and gain permission from the Louisiana Department of Transportation to use downtown roads, including oncoming traffic lanes.

Then, the Sarens team had to calculate loading stability as they loaded each piece, and two or three pieces took over five hours to load due to their different dimensions. They were loaded onto the trucks by a crane supplied by the client.

The crew then had to be extremely alert as they travelled through the city streets, which were made for city dwellers and not for 20-foot wide pieces. The trucks travelled at a speed of 5 to 7 miles per hour due to the large number of side streets and people along the route. All together, 67 Sarens personnel, four New Orleans police officers, and two state troopers were involved in the operation.

A civilian ‘pole’ vehicle led all the others: it carried a high pole at the height of the highest pavilion piece. If the pole hit any cables or trees as it drove past, the crew would have to adjust the load heights on the hydraulic trailers so they could pass safely and easily, without causing damage to property or infrastructure.

“The legs of the Canopy of Peace were offloaded adjacent to the museum, on the public highway,” says project manager Mark Curtis. “All moves took place at night, commencing at around 10pm, and were successfully completed by our skilled team.”

Courtney Richards, speaking on behalf of client Anchor 36, said: “If it wasn’t for you, Mark, and Sarens, this would not have happened. The way you dealt with this job is to be commended, and I cannot wait to work with Sarens again.”

Congratulations to the Sarens team that worked so hard to made this complex transportation operation such a success.