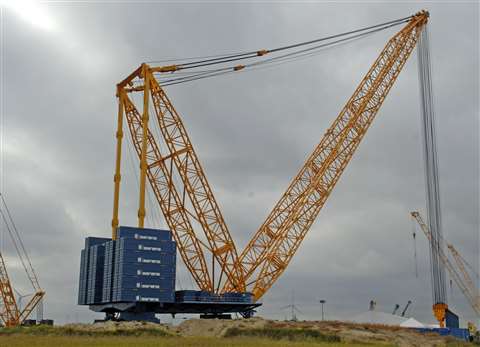 On Friday 13 October Sarens unveiled the second of its giant cranes, the 140,000 tonne-metre rated SGC 140. The new super heavy lift ring crane was erected in the Port of Gent, Belgium, before being shipped to Kazakhstan where it will go to work for three years on the Tengizchevroil TCO project developing the Tengiz and Korolev oil fields.

International heavy lift and transport specialist Sarens already has a slightly smaller version of this design, the 120,000 tonne-metre SGC 120. At the time of writing it was at work loading out jackets and other platform components in Newcastle in the United Kingdom. Both cranes lift 3,200 tonnes but the 140 lifts more to a longer radius. They are based on the design from California, USA-based Rigging International, a company owned by Sarens since 31 May 2009.

The outer diameter of the ring at the base of the crane is 43.6 m and there are 96 wheels for the crane to run on around the double rail ring track. On the machinery deck there is room for 8 winches, each with a 60 tonne line pull. There are also six powerpacks, an electrical container and the operator cabin. Each of the 40 specially designed and constructed corrugated steel containers making up the counterweight weigh 100 tonnes when filled with local material. For transport the material is emptied out and they are used to ship parts and components of the crane. 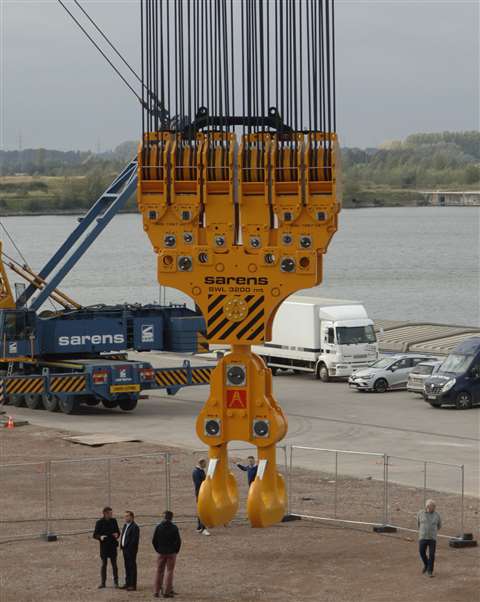