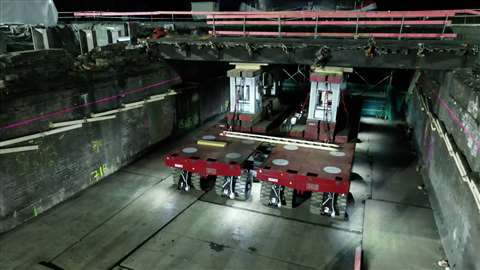 Contractor Schares in Germany chose Cometto Eco1000 modules for a project to move a bridge in Oberhausen.

It was the company’s first time using self propelled modular transport equipment. The first six of eleven bridge elements had to be moved by Schares at night. A pair of six axle Cometto Eco1000 transporters were used to lift and move the bridge elements. The trailer modules were electronically coupled side-by-side, giving a total payload capacity of 520 tonnes.

Schares employees Joe Schönfeld and Dominik Stoßborg alternately managed the operation of the self propelled transport vehicle. The whole combination was controlled using one radio transmitter with a 4.3 inch display screen.

When it came to the move, the whole road, including the underpass, was cordoned off for the evening. Lifting the 14 metre bridge elements using a crane was not possible. To do it that way would have meant the rail company Deutsche Bahn having to dismantle the electrical overhead lines above the tracks at prohibitive cost.

With the power turned off the movement started. To make up the height difference between the deck of the transporter and the bridge some load bearing blocks and excavator mats were used. The suspension was lowered to fit under the old riveted steel bridge. After precisely positioning the transporters, their hydraulic bogies were used to lift two bridge sections at a time from the bridge bearings. This was repeated three times.

The Eco1000‘s 700 mm suspension stroke was put to good use even before it carried the old bridge 30 metres. A mobile crane was waiting to load each section onto a flatbed trailer. After six hours the demanding operation was accomplished.

Schares has been using Faymonville trailers for 28 years, starting with a two-axle lowbed. Christoph Schares explained how easily and precisely the electronic multi-way steering made positioning the Eco1000 under the load. “The self-propelled horizontal transport technology from Cometto will complement our cranes on our building sites in the future, enabling us to offer our customers real added value and above all, everything from a single source.” 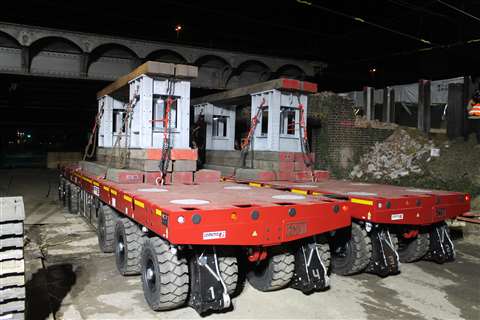 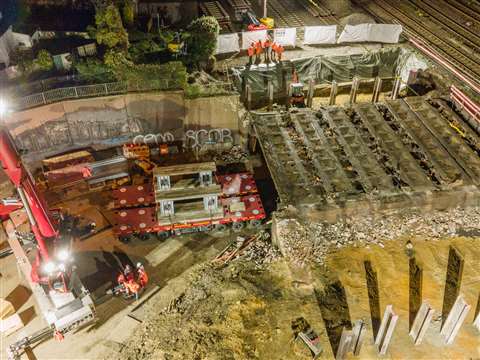