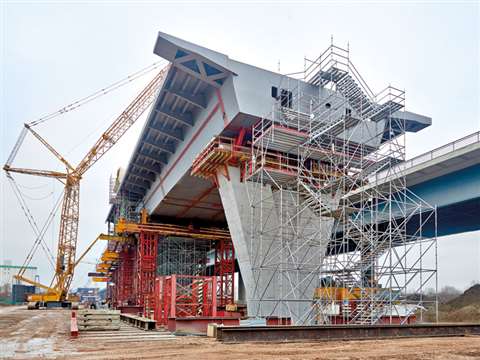 The construction of the Schierstein Bridge in the German State of Hesse is set for completion in 2020.

Layher is providing safe and quick access during the construction of the Schierstein Bridge in the German State of Hesse.

With a length of 1280m, the four-lane Schierstein Bridge, which forms part of the A648 motorway between Mainz and Wiesbaden has become a bottleneck for commuters. The enormous tailbacks are caused by the 60km/hour speed limit. This speed restriction is intended to reduce the dynamic load placed on the welds on this bridge over the Rhine. This is because the Schierstein Bridge, like so many other bridges in Germany, is crumbling despite the extensive repair work carried out at the turn of the century, making a new construction unavoidable.

Its replacement takes the form of a six-lane bridge with two parallel superstructures. The groundbreaking ceremony was held in autumn 2013, and since then the first half of the bridge has been constructed. At 22m and with three lanes, a hard shoulder and a cycle lane/footpath, it is about the same width as the current bridge and is intended to carry temporarily all the traffic so that – probably in late 2017 – the old bridge can be demolished and work on building the second half of the new bridge can commence. Completion of the work is planned for 2020.

Twelve pairs of piers are required for the new construction. Trapezoidal steel box girders – some of them arched – will be used for the superstructure. These prefabricated steel elements are set down on a heavy load-bearing construction on the land, welded together, and then moved into position above the pairs of piers. The welding operations require firstly access to the construction site, and secondly work scaffolding above, at the side of and inside the steel box girders. Two factors in particular are important at the main site: efficient progress of the work in order to observe the tight schedule, and precise adaptation to the complex geometries to ensure safety during work by the professionals.

The solution for the scaffolding erector Max Bögl as a part of the consortium was an integrated system solution: Layher’s modular Allround Scaffolding system. Four basic components in different standard lengths – vertical standards, horizontal ledgers, diagonal braces and decks – and a small number of expansion parts required depending on the application ensure not only optimum adaptation to the geometry, but also a wide range of possible applications. The services available include shoring structures, concreting and reinforcing scaffolding, stairway access and bridging systems, and conventional work scaffolding.

The scaffolding components are connected using rapid wedge-head connection technology with no lost parts – an advantage compared to structures made using tubes and couplers. Prior to the start of the work, Max Bögl’s personnel received comprehensive training in the challenging scaffolding operations from Layher’s main plant in Eibensbach. Given the complex geometries involved, detailed advance planning is also important for the trouble-free assembly and dismantling of the scaffolding. Max Bögl is assisted in these tasks by Layher’s application engineers. Using 3D planning techniques, it is possible to adapt the individual scaffolding elements optimally to the geometry of the structure and make sure in advance that no collisions with nearby obstacles can occur.

In order to modify the heavy load-bearing, the bay lengths in the 60m long and approximately 12m high birdcage scaffolding below the steel box girders are for example simply varied. The fact that decks are only needed at the working levels of the Allround Scaffolding – in this case, the topmost level – also helps to ensure material-saving assembly. By contrast, the facade-like scaffolding next to the steel box girders has to match the arched shape of the bridge. Because the vertical standards are available in different lengths, it is possible to adjust the height of the scaffolding using standard parts. Both advantages come into their own in the case of the work scaffolding inside the steel box girders, because in this case it is necessary to take into account the trapezoidal braces running longitudinally along the structure, the transverse elements with bracing and the height differences resulting from the arched structure. An Allround bracket specially intended for the trapezoidal shape is a useful addition in combination with the different standard lengths. To minimize the risk of fire, Layher steel decks are used as the working platform in all the work scaffolding. With their profiled surface, these permit non-slip work even in adverse weather conditions.

However, precise adaptation of the geometry of the work scaffolding is only one element helping to enhance occupational safety at the construction site – sure-footed access is equally important. This is why escape routes are integrated along the entire length of the work scaffolding. Secure footing is also ensured by the steel decks. Stairway towers are used for high-level access instead of ladders for improved safety.

The Allround System includes expansion parts for this purpose which can be used as required. Comfort stairways, a further development of the proven platform stairway, are used to access the site. With their 175-millimetre-deep and grooved steps and entry and exit landings, these one-piece elements ensure a safe stairway ascent – even when carrying work material. The site managers also chose the Allround construction stairway tower 200 as a further escape route: this consists of the basic Allround components, two separate stairway stringers and steel decks as steps. The low weight and compact volumes of the individual components, which help permit rapid assembly, as well as the variable step width, constitute two further advantages. In this way, it is possible to create an escape route of 1.40 metres in width. Moreover, the alternating construction saves material and ensures adequate headroom.