Scissor and mast launches from GMG

The US-based manufacturer, which launched into the access industry last year, will show the new scissor and mast lift at the Rental Show, taking place in New Orleans, US in February.

The 1530-ED micro scissor fits a need that has been somewhat overlooked, says Jim Tolle, president of GMG. “Traditional 15ft-19ft machines are just too heavy and cumbersome. It is very difficult to get them in elevators due to weight and length constrictions and mast lifts just don’t have the deck space. 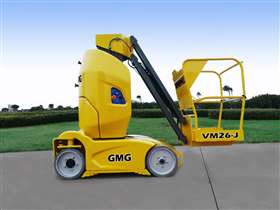 GMG has combined the compactness of the 1330-ED micro scissor with the versatility of the 1930-ED, resulting in a very compact, lightweight electric drive machine, at 1,892 pounds (860kg) but with a large deck once the slide out deck has been extended, says the company. Its capacity at 530 pounds (240kg) is more than most 19ft scissors. “This is the best of both worlds, compactness yet versatility.”

The second launch, the VM26-J mast lift is designed with a compact envelope, all electric drive and robust elevating mast and extended jib. Features include the manufacturer’s quiet operating system and spacious platform, with 120 degrees of jib oscillation, large non-marking tyres and 40% gradeability.

Global construction industry to grow by 5.7% in 2021
Report predicts construction to see good growth in 2021, although issues such as lack of materials remains a concern
Loading...
Previous Next ×