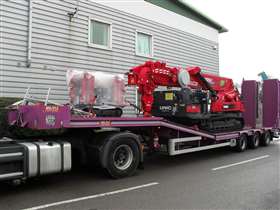 UNIC said the URW 1006 has a 30.7 metre lifting height and 24.3 metre working radius but a width of just 2 metres, which it claimed makes it suitable for working in restricted spaces. The mini crane has a pick and carry function which the company said enables it to travel with loads up to 1.5 tonnes. Its configurable outriggers provide maximum stability when lifting on uneven surfaces thanks to their full safety interlocking system, said UNIC.

According to UNIC, Serviloc Nacelles now has over 12 specialist lifting platforms and spider cranes in its range and the company will be commissioning its spider crane fleet for work in the West of France, as well as projects in neighbouring countries.