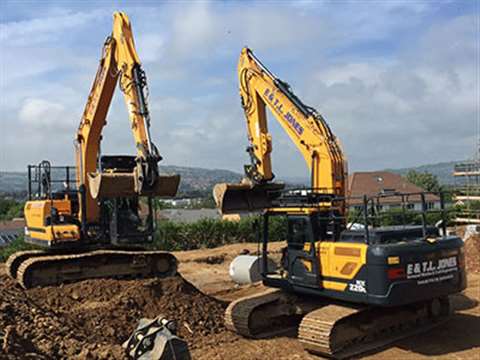 United Kingdom-based civil engineer and contractor E&TL Jones has revamped its existing fleet with a host of new Hyundai excavators.

The company, headquartered in Wales, has swapped seven of its existing machines with brand new excavators from Hyundai’s latest HX range.

The firm originally took a raft of new Hyundai crawlers in 2014 in a deal that saw the company shift its fleet focus from another manufacturer’s machines.

It replaced the larger excavators in its 22-strong fleet of with five new Hyundai machines under a deal brokered by local dealer Molson’s area sales manager Luke Mercer.

Now, after three years of heavy work on sites in south and west Wales, the company boss Eirian Jones has taken the decision to swap his machines for the latest models.

The HX140L crawlers are a straight swap for the R40LC-9A excavators that the team has been working with but the two R160LC-9As have been upgraded to larger HX220L excavators.

“We have kept in close contact with everyone at E&TL Jones throughout the warranty period, making sure everything was in order and that service levels were kept up,” said Luke Mercer.

“That has also given us the opportunity to listen to what the team there actually need to make their work easier. They decided they needed a couple of larger machines and that upgrading the R160LC-9A excavators would be ideal.”