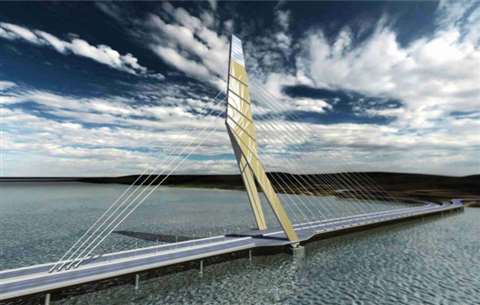 The development of a cable stayed bridge in India’s capital city of Delhi is underway. Partha Pratim Basistha reports

Named Signature Bridge, the landmark tourist icon, owing to its design aesthetics, will also improve road connectivity between North and East of Delhi over India’s historical river Yamuna.
The bridge involves setting up flyovers, loops and ramps comprising a 1.8 km eastern and 4.2 km western approaches. It will be connected to the main 675 metre long, unsymmetrical cable stayed bridge with dual carriageway of 14 m each (4 + 4 lanes) with 1.2 m central verge and maintenance walkways. The other components are 251 m long span and bow shaped steel pylons of about 154 m height with cable stays on one side and back stays on the other side.

Indian construction major Gammon is the contractor for the approaches. Work for the main bridge is by joint venture of Gammon India, Cidade Brazil and Tensacciai of Italy. The client for the project is Delhi Tourism Development Corporation (DTTDC).
Lifting and erection is the most vital construction component of the project. Shubhendu Bose, DGM Projects, Gammon India, says, “There have been the major determinants behind selection of cranes for the project. This includes, lifting and erection of varied loads of the precast concrete sections for the approaches , erection of heavy loads of the pylon and its base sections at long radius, paucity of space for setting up the alignment of the intersections connecting the approaches from both the ends of the bridge and uneven terrain of the Yamuna river bank.”

A 350 tonne capacity 4-axle Gottwald AK 380 truck mounted lattice boom crane is being used for erecting precast concrete sections between 68 and 100.5 tonnes with boom configured between 25 and 45 m for setting up the approaches. The crane is using its four outriggers spread across 3 m for the job on a section of the site that has been compacted to make it even.

A 1973 100 tonne Gottwald AK 150 truck mounted lattice boom crane is also erecting precast concrete sections between 60 and 70 tonnes with boom configured between 25 and 34 m. It is also working to erect and dismantle temporary precast trestle columns for supporting the precast sections. The crane is also helping to assemble the steel trestles weighing between 25 and 30 tonnes at the fabrication yard. The AK150 has earlier worked at Delhi Metro’s second phase project. A 25 tonne truck mounted, three section PPM Poclain truck crane is also helping towards erection of temporary trestles to support sections of the deck of the main bridge.

Vital roles
Gantry crane roles are vital in the project. One 100 tonne and 20 tonne rail mounted gantry crane from Indian manufacturer, Anupam Industries is working at the approaches for lifting precast concrete sections. An order for another, new rail mounted, gantry crane with 40 m span and 60 tonne lifting capacity has been recently placed by Gammon with Indian industrial crane manufacturer Electromech Industries. The crane will be lifting 30 tonne precast concrete sections for the approaches connecting the main bridge on the river which cannot be accessed by the heavy crawler crane.

Another rail mounted gantry crane, also from Anupam Industries with 100 tonnes capacity and 2 tonne capacity hook is working for casting and lifting of concrete slabs between 7 and 32 tonnes with depth of 3.5 m, 7.64 m length and 4.08 m width .The crane has earlier worked at Delhi Metro’s second phase for similar jobs.

A 25 tonne capacity Kobelco RK 250 rough terrain crane is employed at one of the uneven sections of the site with its three section boom for assembling sections of the precast girder launchers between 4.5 to 7 tonnes. The crane is also being used for the erection of gantry cranes, scaffolding frames and formwork for setting up piers of the approaches.

Sizeable numbers of Indian made Escorts 14 tonne capacity ‘Hydra’ series pick and carry cranes are helping to transport site utilities, trestle and scaffolding sections between various locations at the sites. Lowering of shuttering sections for pile caps is one of the major jobs of the cranes. All the light and medium capacity cranes working at the project are owned by Gammon.

The star attraction
Among the cranes working, the star attraction is a 1,250 tonne capacity 2004 Terex Demag CC 8800 lattice boom crawler crane. Gammon India has hired the crane for a year from heavy lift specialist Sarens, for the erection of the main cable stayed bridge.

Prior to working at the Signature Bridge project, the crane has worked for erection of heat exchangers, columns and strippers at India’s state energy major, Gas Authority of India Limited’s plant expansion at Bijapur in South India. It was also used by Jindal Steel and Power for erection of retinol column weighing 572 tonnes for captive coal gasification plant for its steel plant at Angul in Eastern Indian mineral rich state of Odisha.

Being modular in design, the crane was easily transported to the site from South India in 50 open truck trailers that moved in total fifty segments. Transportation was mainly carried out at night. The crane was assembled by the help of a 350 tonne capacity Gottwald crane and a 75 tonne capacity Tata ALC duty cycle crane.

Setup challenge
However, setting up the crane on the bank of the river with extreme sandy soil and uneven surface posed challenges. It was overcome by preparing the soil to have the desired ground bearing capacity for the maximum lift. P K Mishra, manager of operations at Sarens Heavy Lift India, said, “The ground bearing capacity was made of 30 tonne meters square. As a precaution towards heavy flooding caused by the Yamuna River during monsoon, we have placed the crane one meter above the bank, which is where the water usually reaches during flooding of the Yamuna.”

Preparation of the site for the cranes is a major challenge for the project, as the location has extensive sloping rock profile, requiring modifications. Further, the area comes under high seismic zone-4.

During one year of its stay, the crane will mainly erect the pylon structure weighing 6,500 tonnes and a deck weighing 7,500 tonnes. The heaviest component is the pylon base weighing 425 tonnes with dimension of 11.3 x 6.3 x 4.3 m.

Presently, the crane is carrying erection of the sections of the cross tie of the pylon weighing 350 tonnes with a boom configuration of 48 m and a working radius of 23 m. It has 220 tonne counterweight and 180 tonnes super lift counterweight. In addition, 8 x 2 = 16 rope falls is being used for lifting the loads. The crane has 108 m main boom and 78 m luffing jib arrangement.

For erection of the 154 m steel tower, including the tower head of the cable stayed bridge, the boom will be configured at 108 and 78 m at 50 m radius. The steel tower has a total 55 blocks weighing between 120 to 180 tonnes. The base of the pylon weighs 425 tonnes. The crane’s 600 tonne super lift counterweight will be used for erection of the maximum block body weight of 425 tonnes. In total, 55 blocks will be erected with boom configuration between 78 and 108 m. Dilbag Singh, crane operator says, “The configuration may vary depending on the actual requirement of the client during execution stage.”

To reduce the working height, certain sections of the pylon base are being joined with cross beam plates weighing 1 tonne. A 75 tonne ALC Tata 955 duty cycle crane is helping to lift the cross beam plates. The crane is also being used to lift and place hydraulic jacks between 700 and 800 kg for supporting the temporary shuttering for the pylon blocks.

Duty cycle cranes are being used extensively at the project owing to large scale foundation requirements. A 75 tonne capacity 280 Telcon Friction Crane can be seen working for well foundation of the project’s P23 column. The column will be taking the main pressure of 6,600 tonnes of tensile load of the cable stressed pylon. The crane is helping prepare the well by levelling the uneven surface. The crane is also assisting in lowering shuttering materials of 5 tonnes below 50 feet with 15 m basic boom. Lowering of shuttering materials is also being carried out by another fully reconditioned 18 tonne Tata crawler crane. At least eight TFC duty cycle cranes are working at the main bridge site.
To ensure that the cranes at the project work safely and deliver high uptime, third party inspections have been carried on the cranes. Skilled operators with experience between 10 and 15 years have been appointed. The project is expected to be completed by end of December 2014.

Transport challenges
The pylon base of the bridge weighing 425 tonnes was fabricated at Jiangsu province near Shanghai, China. The base was transported from Shanghai to Kandla port in Western Indian state of Gujarat. It was then transported from Kandla to Wazirabad in Delhi to the bridge site covering a distance of 1,640 km by road. The base was transported in modular trailers with 12 axles and 168 wheels with each axle having independent hydraulic arrangement. Transportation of the shipment was done mainly at night. A separate bypass had to be set en route beside bridges, roads and toll plazas for facilitating movement of the over dimensional cargo. Other initiative included strengthening of numerous railway crossings on the way. The transportation was carried by Indian ODC transporter, Resham Singh & Company.