The construction industry is fully embracing the concept of BIM, as it provides an efficient way to manage complex projects. A prerequisite for BIM to be used successfully, however, is that the very detailed schedule and build sequences defined by BIM must be strictly adhered to. Regular and accurate site surveys are crucial to achieve this. Although drones are suitable for collecting such site data, they have various limitations. A crane-based camera mapping system offers an alternative and enables the automated capturing of on-site data, both at minimal cost and without interfering with the site. This article from Julian Norton, business development manager at photogrammetry software developer Pix4D, explains how a crane camera solution enables project managers to resolve some of the most complex and lingering challenges in construction.

In the past few years, building information modelling (BIM) has gained considerable ground in construction. More and more companies worldwide are adopting BIM technologies to optimise project management, helping them to better synchronise all aspects of the construction process: planning, designing, building, operation, and maintenance. In 2010, the UK-based National Building Specification (NBS) reported that less than 15 percent of the construction industry was engaged with the building information modelling approach. In 2015, that number reached 48 percent, and 2016 saw tremendous growth as governments engaged in BIM, creating new policies to encourage and support BIM adoption.

However, there still are many challenges to address in the industry today. Companies like Liebherr, one of the world’s largest manufacturer of tower cranes, recognise the need to adopt intelligent and collaborative system to improve project management efficiency. Being able to visualise and monitor the progress of construction sites is one of the key challenges highlighted by construction professionals. The lack of communication and feedback in the industry shows there is a strong necessity for continuous site surveying and tracking technologies. 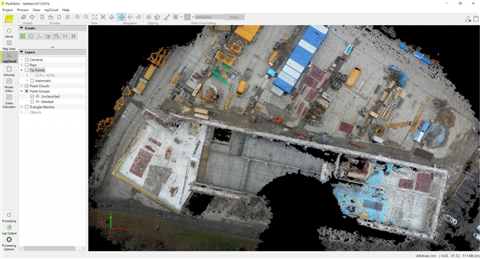 The introduction of drone mapping revolutionised aspects of site monitoring in construction, with more and more construction companies embracing the use of drones as part of their smart building process. Orthomosaic maps, point clouds, and digital surface models can be produced from drone imagery for complete aerial site surveys or inspection. Data collected with drones is typically available shortly after the flight and can usually be processed within just a couple of hours. Although their use in construction is increasing, these flying robots have their limitations as well. Piloting drones over construction sites in cities, urban districts, airport zones, or critical areas can sometimes be a real challenge due to flight permissions, weather conditions, legal restrictions, and job site obstructions. Alternative solutions are therefore required to complement drone-based surveying systems.

A camera mounted on a crane is an excellent alternative to drone mapping and traditional techniques such as terrestrial laser scanning. Cranes are already present on construction sites and no flight permission is required. In places where drone flights are sometimes too difficult or even impossible, a crane camera is ideal as a long-term alternative, or it can work alongside and complement drone imagery.

Photogrammetry software developer Pix4D has teamed up with Liebherr in creating a new site monitoring solution. Combining Pix4D’s expertise in site mapping and Liebherr’s experience with cranes, a crane-based automated solution with BIM integration has been developed. The new solution consists of an advanced camera system installed on tower cranes which is connected to the Pix4D cloud-based software. Mounted on and powered by the crane, the camera system is fixed at the end or along the jib.

The optimal location is dependent on the site configuration, but a position over the centre of the building site usually provides the best results. The system is equipped with movement sensors and firmware, and takes images automatically when the crane begins to operate. When enough data has been collected to provide a complete aerial overview site, it is automatically and wirelessly transferred to the Pix4D Cloud via WiFi or a 3G/4G connection, where it is processed. 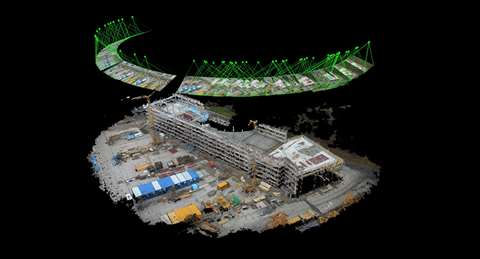 The Pix4D Cloud turns the images into 2D and 3D map intelligence: orthophotos, 3D point clouds, 3D mesh models, and digital surface models. The crane camera solution produces similar surveying results as drones, but the system operates without human intervention. It automatically delivers daily updates of the as-built status, which are available on the cloud to be analysed and shared with anyone who needs to review the current site status. Additionally, results can be exported to BIM software for further analysis.

It is a major advantage to receive automatic reports rather than having to wait for feedback from the field. With continuous mapping during construction works, it is easier to monitor a site and spot errors or omissions early. An estimated 15 percent of a typical construction site’s cost is caused by human mistakes, so by having an automated solution to verify the as-built status and align the schedule, a significant reduction in cost and project duration can be achieved.

The first crane-based camera solution has been deployed on the construction site of Liebherr’s new administration building in Biberach an der Riss (Germany), the headquarters for the Tower Crane division. Installed in November 2016, the solution has been running since then, fulfilling its promises: monitoring the site daily, offering a complete aerial overview of the jobsite, documenting progress, and facilitating communication among all stakeholders. Liebherr team members can access the Pix4D Cloud to visualise the site day by day.

Given the complexity of construction sites and the large volumes of data involved, there is a strong demand for fully automated solutions. With an automated workflow that operates without human intervention and that provides deliverables that are compatible with BIM software, the Crane Camera marks a major step in the right direction. The next step is to combine crane-based data with ground-based handheld cameras and develop integrated solutions to automatically produce 3D point clouds of the construction site as seen from multiple angles. These developments will not only challenge traditional forms of surveying, such as laser scanning, but they will also bring the industry one step closer to real-time, fully automated, accurate and continuous monitoring of the entire construction site. 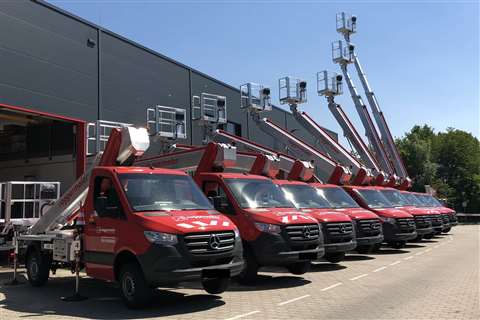 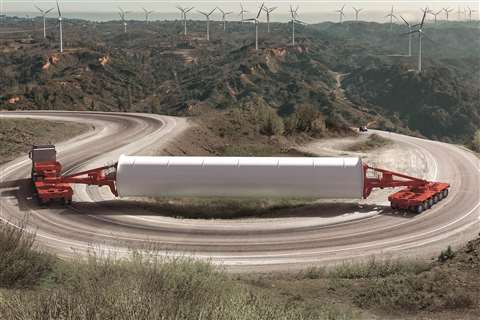