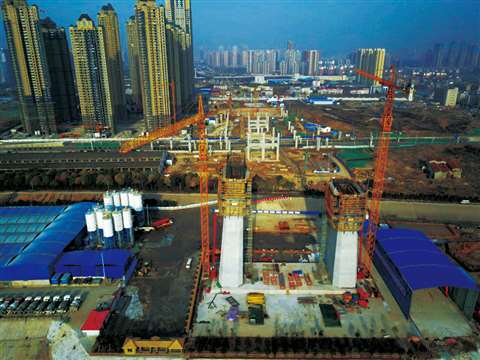 The bridge will be 4,134 metres long and its main span will stretch 1,700 m across the Yangtze River. This will make it the longest suspended span bridge in China, and the second longest in the world. It will also be the first double-deck bridge across the Yangtze River and will carry ten lanes of traffic, with the upper deck being an expressway and the lower deck being an arterial road. The project is expected to cost RMB8.5 billion (US$1.27 billion).

The two bridge towers will stand at 250 metres tall. According to the cranes’ manufacturer, Manitowoc, the two MC 475 models used for the towers’ construction will only require six anchorages to reach their final working height. It claims this improves operational efficiency during the construction process and delivers cost savings.

Manitowoc said the China Railway Major Bridge Engineering Group has been a Potain customer for 20 years. Xu Rongfeng, equipment manager for the Yangsigang Bridge project at China Railway Major Bridge Engineering Group, said that Potain cranes have had an exceptional track record on the company’s other large-scale projects. “The grand scale of the double-deck bridge across the Yangtze River makes the project highly challenging, and this is made even more difficult with the tight construction schedule,” he continued. “The progress of construction hinges on the quality and performance of the equipment we use. Luckily, the reliability and operational efficiency we get with the Potain cranes gives us complete peace of mind.” 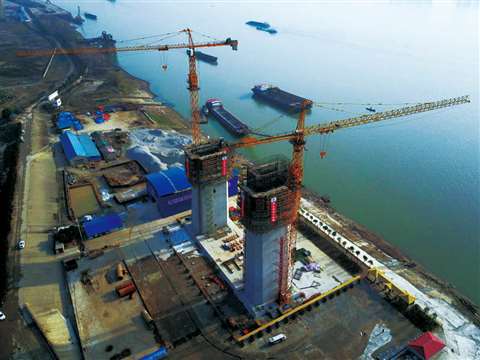 Li Qiang, crane manager at China Railway Major Bridge Engineering Group’s equipment rental division, said, “Potain cranes are far superior to their rivals in terms of rope capacity and lifting speed, and this is a big advantage on this project as efficiency and performance are top priorities. We can’t afford to have any machine breakdowns. When purchasing cranes, we look at the quality of the components and the design details that go into a machine. With the Potain cranes, we like the finish of the steelwork, which is corrosion resistant making them suitable for harsh environments, such as bridge construction sites which are almost always around water.”

To ensure the maximum amount of crane uptime, Manitowoc said its Crane Care staff have been paying regular visits to the job site, handling routine maintenance work and providing training.