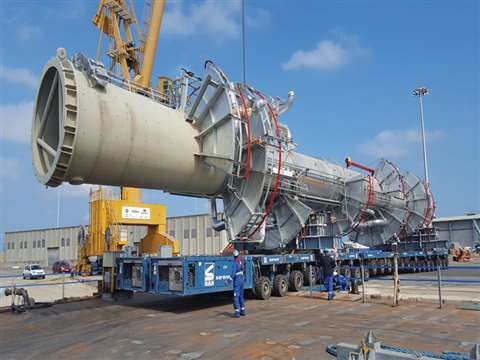 Sarens at work with SPMT in Taragona, Spain

Manufacturers have been increasing the axle load capacity of their self propelled modular transporter (SPMT) equipment offering. Katherine Weir looks at the latest models, trends and customer demands.

Described by the manufacturer as a standout feature, the wireless Intelli-Drive remote controller on the Enerpac 600 is designed to have a simple interface that operators can learn to use in one day. Crisci adds, “One person can operate the transporter remotely, safely away from the load. This single point of control reduces risk of operator miscommunication.”

To properly distribute the load on an SPMT, each wheel unit of the 600 has a built-in lifting cylinder. These cylinders can absorb unevenness of the ground and function to lift and level the SPMT for travel. Capacity per trailer is 60 tonnes (20 tonnes per axle line).

Another manufacturer with new SPMT products for the specialized transport sector is Tii Group (Scheuerle, Nicolas, Kamag and Tratec). The latest products include the split type SL, SL with widening system, type AC for operation in temperatures as low as minus 40 °C, the ES with a 60 tonne axle load and the F with a 22 kilometres per hour top speed. Also, the SPMT Light - electrically or diesel-driven.

Christopher Rimmele at Tii Group says, “Electrically driven models, such as the SPMT Light, have raised a lot of interest. This model is extremely manoeuvrable due to the integrated power pack.”

Scheuerle is also focusing on manoeuvrability as well as offering an SPMT range that covers all aspects of the terrain, weather conditions, specific transport needs and cargo size. The company says that diversity in its product offerings is the key to its success in this market.

An example of Scheurele’s popularity with end users is the 240 axle line order for the new generation SPMT from international heavy lift and transport company ALE earlier this year. The new trailers are said by the company to increase its fleet by 14,400 tonnes capacity.

David Purslow, general manager - global operations at ALE, says, “The vehicles have 60 tonne capacity per line with 15 inch tyres, making these the world’s highest capacity SPMTs. The trailers also have a much higher bending moment capacity. This enables them to have a greater spread and the ability to carry an increased loading. They have mainly been used across ALE branches in the UK and the Netherlands.”

The manufacturer says it has seen “demand for higher capacity axles and increased interest from clients for us to accommodate this” - prompting the large purchase from Scheuerle.

Mammoet has also made an investment in Scheuerle SPMT to cover a niche area of continuing work. The international heavy lift and transport specialist has purchased several axle lines of Scheuerle AC transporters with special Arctic specifications. “These SPMTs have been equipped with seals made out of a cold-adapted rubber compound, auxiliary power packs to maintain engine warmth and hydraulic additives that keep fluids moving at extremely low temperatures,” says a Mammoet spokesperson. “They also have LED lighting to illuminate the area around the vehicles, which is an advantage when working in areas where daylight hours are scarce.”

Commenting on the latest trends in the SPMT sector, Mammoet says, “Modules are increasing in size while weight has remained more constant. With bigger loads, the central point of gravity becomes higher, which means they need a wider base for transport. With Scheuerle, we have developed a special widening adaptor that will allow us to transport loads more efficiently. It allows the oversized objects to be loaded on a wider surface without the need to add additional trailers to the transport configuration.”

For Italy-based Fagioli, the demand for increased capacity has prompted them to include 50 and 60 tonne axle line trailers into the fleet. The company also places importance on the ability to adapt its fleet to any requirement using “in-house engineering tools such as connecting beams and dedicated saddles”.

Claiming to offer the highest bending moment in the market is manufacturer Faymonville with its PowerMAX series. The latest generation is the SPMC that has a maximum technical load per axle line of 45 tonnes at a speed of 0.5 km/h. The maximum pulling force per axle line is about 170 kilonewton (kN) and top speed (empty) is 14 km/h.

Marco Andres, Faymonville spokesperson, says, “A new development is the wireless remote control that allows better handling. The user-friendly system displays all relevant process and transport data quickly and clearly with the aid of a touchscreen display. When several vehicles are connected in a group, the driver is provided immediately with a clear visual overview of the settings that have been made.”

An end user company expanding its SPMT fleet is Belgium-based international heavy lift and transport specialist Sarens, which has added the Kamag K24 ST units with higher bending moment and axle-load capacity than its previous models. As well as improved electronics, other features include LED lighting above the bogies as well as troubleshooting via modem connection.

“In order to comply with different weight limitations worldwide, a considerable part of our K24 ST fleet is composed of 5 axle units besides the standard 4 and 6 axles,” says Carl Sarens, director of global operations and technical solutions at Sarens. “As part of the 5 axle units we have a ‘Stretch’ version allowing to adapt the SPMT width towards the specific need of the transport with increased stability.”

An interesting hybrid with the lifting capability of an hydraulic gantry and the flexibility of a SPMT comes from Enerpac with its vertical cask transporter. The model was designed, fabricated and commissioned for energy technology company Holtec International.

Pete Crisci at Enerpac says, “The vertical cask transporter is the ideal solution for moving spent nuclear fuel storage casks that need to be lifted and manoeuvred on site. It is especially suited to handling casks where space restrictions rule out the use of a crane, or if a completely integrated lift and transport system is needed.”

April’s Bauma exhibition in Munich, Germany, saw the introduction of several new SPMT developments for Germany-based manufacturer Goldhofer. ADDrive was introduced as “an intelligent solution that brings together the benefits of a towed module with those of a self-propelled module.”

Rainer Auerbacher, Goldhofer director of sales - heavy duty modules, adds, “The one feature of ADDrive that stands out the most is its extremely high flexibility in terms of the range of applications it can be used for – both as a self-propelled vehicle and as a towed module. For its users, this means significantly simplified vehicle mobilisation and – with its four operating modes – much greater efficiency in daily working right from the start.”

The company also launched its PST/ES-E-type SPMT. Benefits of the PST/ES-E 285 are listed as high traction force of up to 165 kN per powered axle line, high bending moment, electronic multiway steering with a steering angle of +/- 135 degrees and its hydraulically adjustable track width. Auerbacher added, “With a track width of 1,810 millimetres, the PST/ES-E 285 has a lateral stability that is 25 percent higher than that of a conventional SPMT with a track width of 1,440 mm.”

The question of whether the race is on for manufacturers to provide increased load capacity with their axle lines was answered by Christopher Rimmele at Tii Group. “The limiting factor is often the underground, not the vehicle. So, in our opinion, there will be no ‘race’ where manufacturers are competing with higher axle loads –because it’s not always an advantage the customer can use.”

For Mammoet, it believes that pushing the limit of capacity has made stability a more pressing issue that requires very accurate engineering, as limits in stability and capacity are being reached faster with the higher axle line loads. “If required, our trailers can be upgraded to 60 tonne axle line loadings, but we prefer to use air-filled tyres whenever possible,” a representative says.

Another company basing its development plans on the tyres available is Goldhofer. Auerbacher says, “In view of ground pressure constraints, we are not currently confronted by customer demands for a general increase in axle loads. Ultimately, developments in the trailer industry are influenced by the potential available from the tyre industry.”

Sarens explains that higher axle line capacities are driven by manufacturers but that the industry still works around the generally accepted standard of 40 tonnes. This is because this size, the company says, most often fits with other boundary conditions like ground bearing capacity and barge deck strength, etc.

Fagioli can see the pros and cons of increased capacity. Rudy Corbetta says, “Modules, vessels, platforms and jackets are getting bigger and bigger and SPMTs with a capacity of 60 tonnes per axle line could be positive to lower the fleet you need to move thousands of tonnes in one shot. The problem is that sometimes you have to face the ground capacity that does not allow the transport of these huge items.

“I’m not sure if it’s worth it to have, let’s say, 100 tonne capacity axle lines as you cannot negotiate the enormous capacity load concentrated onto a few axle lines versus the low capacity ground.”