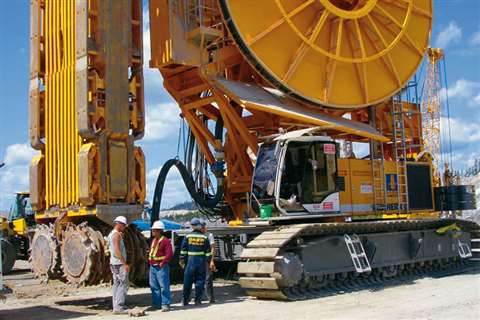 Bauer Maschinen has released its full-year results, showing a 4.9% decline in total group revenues, to just under €1.7 billion.

The foundations engineering specialist’s CEO, Michael Stomberg, who took the reins at Bauer just six months ago, said he was happy with the group’s overall performance, including the earnings before interest and tax (EBIT) figure of around €100 million, which represents an 11.7% improvement on the previous 12 months.

The group’s earnings after tax were reported to be €24 million, while its net debt was reduced by 5.4%, to around €562 million.

Stomberg said revenues from the construction segment were weaker than the previous year, however, primarily because of reduced demand from the Middle East region.

The operating business, however, was good, said Stomberg, who stressed that the fourth quarter of 2018 had been particularly strong.

In terms of equipment, Bauer saw group revenues of €723 million, down 4.2% on the same time last year.

Looking ahead to 2019, Stomberg said, “We do not expect a substantial growth in our group revenues, but do expect a significant increase in earnings after tax. This will be driven particularly by the resources segment.”