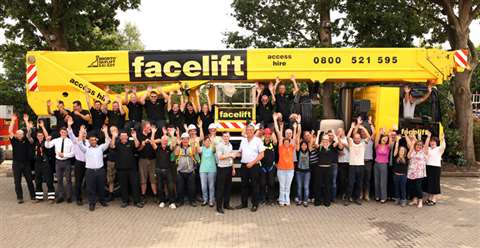 Facelift has promoted operations director Paul Standing to managing director of the company.

Mr Standing said he aimed to make Facelift the biggest powered access equipment supplier in the UK. He began his career at Facelift in 1999 and worked his way up through the business. As operations director he was instrumental in developing the company’s network of depots across the UK.

Gordon Leicester, founder and vice chairman commented, “Like myself, Paul's entire working career has been dedicated to Facelift. He joined the company in 1999 as the ‘new yard man’ and has since then worked himself up the ladder from the hire desk to operations director, primarily through his communication skills and thorough knowledge of both Facelift and the powered access industry.

“For several years Paul has been my right hand man on the running of Facelift and his new position is natural progression and acknowledgement of his abilities.”

Mr Standing added, “The powered access market is very competitive, with more potential suppliers than ever to choose from. Our goal at Facelift is to be the company that people think of first, and to be the UK’s number one supplier of 7.5-tonne-and-under access equipment.