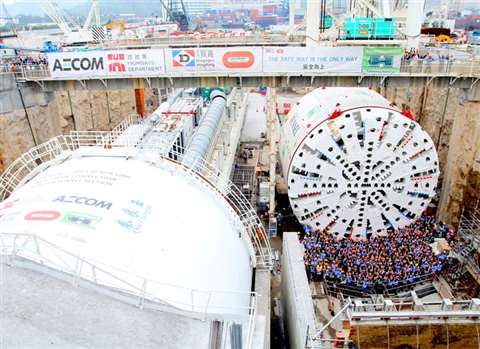 The TBM will excavate a 5 km long sub-sea road tunnel, which will pass some 50 m below the water level in pressures as high as 5 bar. According to Bouygues, the tunnelling project will involve some 800 workers.

The contractor added that the TBM features a series of innovative features. These include a system called Mobydic in the TBM cutter heads which monitor wear and map progress in real time. A further system called Telemach is a robotic arm which can change cutter wheels on the TBM head. Another robotic system called snake is used to clean and unclog the TBM cutters.

The HK$ 18.2 billion (US$ 2.3 billion) tunnelling contract is being carried out by Bouygues Construction and its Hong Kong Subsidiary Dragages, and completion is scheduled for the end of 2018.