Called Bluelink, SP said the 6.5 tonne (14,300 lb.) capacity load cell is aimed at end users that remain loyal to traditional equipment but who would like the safety offered by the Bluetooth functionality. By using Bluetooth, data can be read at a distance of up to 328 ft. or 100 m, SP explained.

To read the Bluetooth data users need to install SP’s free HHP app on an iOS or Android smartphone. The app allows the operator to log data versus time or events such as over- or under-load. An adjustable alarm alerts the operator via smartphone if an overload occurs. 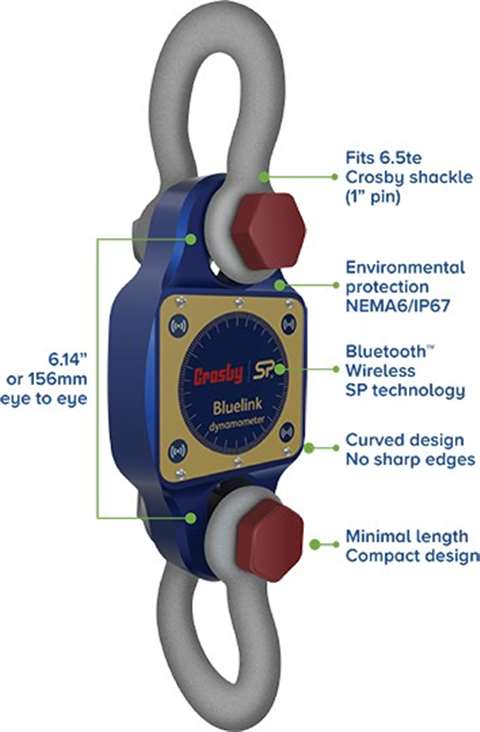 Bluelink has an analogue load indicator on the main screen and offers users a number of languages including English, Dutch, Spanish, Norwegian, Japanese, and Chinese. It measures six inches (156 mm) from eye to eye and has a safety factor of 500 percent, said SP. It is constructed from aerospace grade and hard-anodised aluminium and what SP calls ‘an advanced internal design structure’.

David Ayling, global business development director for load monitoring solutions at SP, said: “It’s important that we market the Bluelink accordingly. The launch doesn’t place a yardstick by which to measure the ongoing technological progression of our range but more reflects our ability to continue to provide tools for the many different types of user looking to understand the forces being applied. This isn’t an alternative to our state-of-the-art systems but a step towards the latest wireless technology, perhaps for professionals only just beginning their migration from traditional solutions.

“The design not only provides the product with an unrivalled strength-to-weight ratio but allows the use of a separate internal sealed enclosure providing the load cell’s electronic components with NEMA6 or IP67 environmental protection even with the battery cover plate missing. Despite the fact that Bluelink isn’t a fully-spec’d, top-of-the-range load cell, its qualities still suit it to the harshest industrial or leisure environments.”