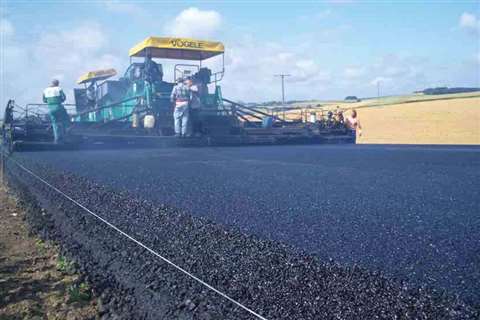 German contractor Gebrüder von der Wettern has used a Vögele Super 2500 with SB 300 fixed-width screed in TP1 version and its MT 1000-1 Mobile Feeder to rehabilitate a 6,3km stretch of the A48 “Eifela

Europe's roads are of vital importance to its economic prosperity and growth. Many road projects are therefore designed to remove congestion bottlenecks and improve links between industrial production zones and distribution hubs.

In Germany, for example, the Kirchner/Hentschke joint venture is currently closing a 14,3 km long ‘gap’ on the new A20 ‘Baltic Sea motorway', between the junctions of Groß-Grönau and Schönberg. Once closed, the new A20 will link business and commercial communities throughout the country with domestic and foreign suppliers and customers, thereby helping to rehabilitate the region's economy.

At the heart of the operation is main contractor Strabag's Wirtgen SP 1500 L paving train. Moving at 1,1 m/minute the SP 1500 L places concrete across 11,5 m in a single continuous pass. The top and bottom layers sit on top of a 250 mm thick cement mortar, which has been covered by a special 2,5 mm thick fleece.

Fastened by bolts it is designed to neutralise the sub-grade against the upper pavement structure. Cracks can be prevented and the different layers can “work” to a certain extent without impairing the quality of the pavement.

The SP 1500 L consists of two separate machines, which work independently placing layers of up to 450 mm thickness, equipped with a hydrostatic travel drive for high paving speeds. On this section of the A20, the new pavement will have a thickness of 270 to 280 mm. This is divided into a 200 mm thick bottom layer and a 70 to 80 mm thick top layer.

A hydraulic excavator positioned in front of the leading bottom-layer paver supplies the machine with 1700 to 1800 m3 of type B 35 concrete/day from Becker Bau's on-site mixing plant.

On completion the A20 will connect the A1 close to Lübeck in Schleswig-Holstein with the A11 to the south of Prenzlau in Brandenburg. Close to the coast, it passes through the entire state of Mecklenburg-West Pomerania for more than 300 km under Germany's “Traffic Project German Unity No. 10” program, which is designed to connect states and link structurally weak regions to the existing economic areas. Future plans envisage continuing the A20 east in the direction of the Baltic States and west to bypass Hamburg as part of a third crossing of the River Elbe.

Like many projects in Western Europe, filling the gap in the A20 ‘Baltic Sea motorway', is about providing access to the network for businesses and their customers while removing network bottlenecks.

Likewise, in the UK construction of the strategically important UK£ 110 million (€159 million) Port Talbot Peripheral Distributor Road, which links junction 38 of the M4 motorway at

Margam and junction 41 at Baglan, South Wales, will assist in providing access to industrial and commercial development and keep local traffic off the motorway.

Building the 9,45 km long road has been divided into four sections, with the initial stage (1A) completed in 1994. Work on the first of the three remaining three stages (1C) started this summer. Construction, by the Hochtief/Griffiths joint venture, includes 1,1 km of 7,3 m wide dual carriageway, two new roundabouts, footways, cycleways, and landscaping works.

The UK£ 10,9 million (€15,8 million) project also involves the construction of two bridges, one over the River Afan and the other over the Dock Feeder stream. Both require piling for their abutments, which has been sub-contracted to Aarsleff Piling.

The addition of 10 new countries to the European Union (EU) on 1 May 2004 was the largest single increase in membership in its history. Of the 10 countries-Cyprus, Czech Republic, Estonia, Hungary, Latvia, Lithuania, Malta, Poland, the Slovak Republic and Slovenia-eight are in Central and Eastern Europe, and knocking on the door for entry in 2007 are Romania and Bulgaria, followed by Croatia and possibly Turkey.

The new countries will benefit enormously from EU membership; with funding of about €41 billion budgeted for the years 2004 to 2006 alone. Of this, €22 billion is earmarked for infrastructure spending, which will include major civil engineering projects. However, many of the countries themselves are cash poor and the question of how to co-fund this infrastructure expansion is a vexing one.

In Hungary, for example, the Government's ‘Regulation No. 2044/2003 (III. 14.)', published in May 2003, contains provisions on the development of the ‘high-speed road network', as well as on the modernisation of the national road network. According to Ministry of Economy and Transport spokesman Gergo Horvath, 420 km of new high-speed roads will be constructed by 2006. Construction will also start on an additional 1228 km of high-speed roads during the same period.

Mr Horvath told CE that under the CXXVIII Law of 2003, known as the ‘Highway Law', in the next few years construction is set to intensify dramatically. Work will include the motorway section between the M5 and the main road No. 4 in the Eastern sector of the M0 motorway and the section of the M7 motorway between Balatonszárszó and Ordacsehi in 2005.

Mr Horvath said that at present funding is available in two parts; the EU and the Government. EU funds will be made available through the Cohesion Fund (HUF 72 billion/€292 million) until 2006. After this the Government will be looking to the private sector to continue funding expansion of the network.

Besides Bau Holding, Strabag, Bouygues, Bilfinger + Berger and Porr, Swedish contractor Skanska has also been building on its success in the recently expanded EU territories. In November, for example, it led a consortium that secured a CZK 6,9 billion (€225 million) contract for construction of a highway in the Czech Republic through its Skanska CZ subsidiary.

The work involves construction of a 16 km section of the D47 highway between Lipnik and Belotin, in the eastern part of the country. It includes 25 bridges, three elevated highways, three viaducts as well as a number of approach and local roads.

The construction period is estimated at five years with completion scheduled for December 2009. However, the highway will be open for traffic in 2008. Skanska owns 43% of the consortium, which also includes Strabag (32%) and Dalnicni stavby Praha a.s. (25%)

While new road construction in Eastern Europe continues to forge ahead many of the more mature markets in Western Europe are now about maintenance and rehabilitation. According to Bruno Roveri, area sales manager at Bitelli, for example, about 80% of the work in the Italian market is maintenance and repairs.

“There are some big sites between Milan, Bologna and Florence for high-speed trains and highways. There are also new roads between Modena and Florence, plus new industrial estates throughout the country, but motorway maintenance is the largest sector,” he said.

Mr Roveri also told CE that while the “big markets” of the UK, France and the Scandinavian countries remain fairly stable, expansion of the EU should provide greater opportunities.

“The expansion of Europe in May this year is of course a good opportunity. It increases the market but we'll need five to ten years to get the market to the same level as Western Europe,” he added.

However, that is not to say that the domestic market does not have potential. According to Mario Spinelli, managing director of Wirtgen Macchine, the Italian Government is keen to continue expansion and maintenance of the network. He also expects the market to be more active over the next three to ten years but with a slow start.

“Italy and Malta are good markets at present. In Malta there are ambitious plans for road renovation. In Italy the construction and maintenance market is also very active at present. This includes bridges all over the country, roads in the north and south, and a ring road in Venice scheduled for 2005,” he said

According to Mr Spinelli, Wirtgen's strategy at present is to offer its customers a full-line. This means trying to get customers to accept all the Wirtgen, Hamm and Vögele products, with customers sourcing all from one single supplier (dealer) but also offering sweepers sourced elsewhere to complete the package.

Mr Spinelli told CE that in general milling, paving and compacting are currently growing, as is soil stabilisation and recycling. These last two are particularly important, said Mr Spinelli, because economically and environmentally they make sense.

“The next 12 months should see good, solid growth in cold recycling in particular. We have 10 orders for our WR2000 cold recycler in Italy. It seems to be the right concept for contractors and the concerns they have in terms of cost, the environment, transportation and urban applications.

“Our new generation of medium sized pavers, the 1600-1 models, for example, have really boosted our market share. It's risen from 8 to 13%. In 2003 we sold 30 units and in 2004 we're looking to do 45. It really has proved to be a big step forward for Vögele. Similarly we've enjoyed some success with Hamm, particularly the DV series rollers, and HCM (Hamm Compaction Manager), which is becoming more popular in Italy due to its user friendliness.

“I think our strong commitment of servicing and parts is also paying off. We now have seven mobile repair shops and a complete network of workshops so we can cover the whole of the country quite easily.

“Our 10 dealers in Italy are responsible not only for sales but for any rental opportunities that present themselves. Roller rental is popular and we're seeing a growing demand for soil stabilisation machines too.

“It's the new products that are driving our growth. Ten years ago we had a turnover of about €3 million. That's now risen to €40 million and we're seeing double-digit growth year-on-year.”

Mr Spinelli stressed the importance of product training in getting new technologies into the market. He said that Wirtgen currently offers on-site and in-house training and can put an engineer on site if the customer wants one.

“When you're spending €500000 it's important to get the right service and that's our commitment to the customer,” he said.

Following European expansion in May this year, what is now apparent is that new road projects are scheduled to take place throughout the east of the region for many years to come. In the west, with its stricter controls on ‘green field’building, new projects will be about filling in the gaps in the network, road maintenance and rehabilitation.

At present the major lending institutions - the European Investment Bank, the European Bank for Reconstruction and Development - are willing to lend those countries that need the money the means to expand their networks. In the future, however, those funds will dry up.

At this point governments and contractors will have to pick up the baton of Public-Private Partnerships (PPP) in order to successfully complete the task.