Rotterdam based crane heightening specialist ZPMC Netherlands commissioned heavy lift and transportation specialist ALE to assist with the heightening of ten cranes at the Port of Felixstowe, the busiest container port in the UK. Five of the cranes weighed 1,530 tonnes and five weighed 1,650 tonnes.

It was not possible to perform the heightening procedure in the location the cranes are normal positioned as this would have impacted the productivity of the port. Instead each crane was transported and heightened at a time that best suited the port management. Individually the cranes were transported to a designated upgrade area using SPMT. The heavier cranes utilised 88 axle lines in four-file 22 configuration while the lighter cranes used 80 axle lines in a four-file 20 configuration.

A custom transport frame was used during each of these manoeuvres to support the cranes as they were being transported and jacked-up for heightening. According to ALE, this saved time compared to transferring the cranes between separate support structures during each upgrade procedure.

Oscar Ehrlich, director, ZPMC Crane Upgrades and Services, commented, “We are delighted to be nominated as main contractor for the Port of Felixstowe. These types of projects require a highly specialist approach to deliver an efficient and timely solution. The team at ALE integrated perfectly to maximise a successful outcome.”

ZPMC is also heightening three ship-to-shore cranes at the BEST terminal in Barcelona, Spain. The cranes will have their height increased by five metres with the aim of speeding-up turnaround at the port. 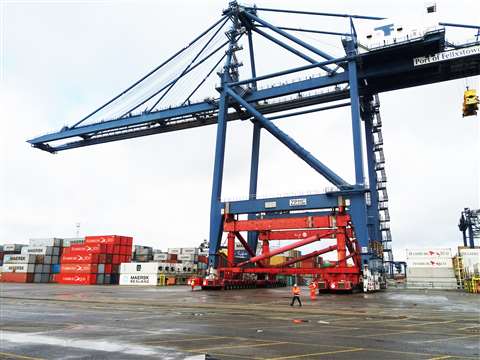